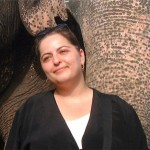 Juliette Terzieff is the head honcho in charge of the Zombie Survival Crew. When she’s not battling zombies, this former foreign war correspondent continues to work as a professional writer and media production specialist covering issues related to human rights, international politics, globalization and the occasional vampire. She’s also been spotted on the convention scene making sure the actors she represents as part of ZSC Entertainment’s management side don’t fall victim to hordes of the undead. What? Oh. We meant fans, not zombies.

Juliette travels the globe searching for the brave, the bold, forward thinkers who know the Zombiepocalypse isn’t something to thumb their nose at. With her trusty crossbow by her side, she spreads the word about the ZSC and encourages everyone to be prepared for any natural or man-made disaster that could come their way. On her travels, she’s been known to pick up an ally or . . . five, continuously expanding the ZSC’s rosters. Fueled by coffee and chocolate, Juliette Terzieff is a force to be reckoned with, giving her the energy needed to wrangle the wildest crew of zombie hunters. Or a wily email inbox.

Where to find Juliette around the web: (Click on the pictures)

Proud Commander of the Red Brigade