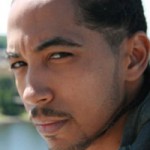 If the war with the undead could be won by charisma alone, we might be tempted to push Neil Brown Jr. out to the front lines. He shot onto our radar as the no-nonsense taking “G” on the Vatos episode of The Walking Dead, a leader who does what is needed to keep his people safe.

As if his time on the battlefield in Battle: Los Angeles isn’t enough to make him excellent ZSC material, Neil is proficient in martial arts, making him an ideal First Lieutenant for the Zombie Survival Crew in the Los Angeles area. If the zombies can’t be charmed into giving up their human-munching ways, we’re sure he can kick enough undead backside to make even the hungriest zombie think twice.

Weapons of choice: katana or a 45 automatic combo

Where to find Neil around the web: (Click on the pictures)

Proud Member of the Red Brigade