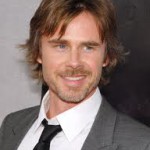 Well, this is a first for the Zombie Survival Crew . . . a shape-shifter. Sam Trammell isn’t really a shape-shifter, but he does play one on HBO’s hit TV show True Blood. His alter ego goes nose to snout with a lot of powerful vampires without tucking tail and that’s the kind of backbone we look for in the ZSC. Sam isn’t all about tail wagging, he’s been in numerous television shows such as CSI: New York, Dexter, and Medium.

Sam’s innate talent will come in handy during the Zombiepocalypse. Creative minds are the first to think of ways out of a tight situation. You won’t catch this commander stuck in the middle of an undead horde, oh no. Coming to the ZSC from California, Sam will aid his fellow commanders in the fight to keep humanity safe once the zombies rise.