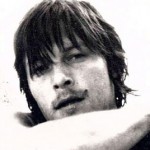 While squirrel tossing may not be the next Olympic sport, it did lock Norman Reedus firmly in the minds of the Zombie Survival Crew’s commanders. Under all the grime and scruff, courtesy of the makeup department for “The Walking Dead”, lays an insanely talented actor, artist, and director. He has starred in numerous films and television shows, most notably The Boondock Saints and its sequel, All Saints Day as well as The Conspirator, Blade II, Night of the Templar, Hello Herman, Sunlight Jr., Pawnshop Chrinicles, and “Hawaii Five-O”. Norman also added his voice to the video game The Walking Dead: Survival Instinct, reprising his role as Daryl Dixon.

Norman’s production company, Big Bald Head, runs out of New York and currently has his project 3 Films available on their website, as well as his photography book The Sun’s Coming Up… Like A Big Bald Head: Photographs by Norman Reedus. With all of the weapons training under his belt from his acting experience, we feel secure leaving Norman to take care of NY come the Zombiepocalypse.

Where to find Norman around the web: (Click on the pictures)

Proud Commander of the Blue Brigade