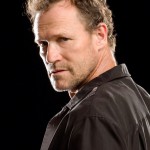 When you put out a call for hardcore survivors, it is only a matter of time before Michael Rooker comes knocking on your door . . . with a sledgehammer. He’s the real deal, notorious for taking cast mates out to the gun range to help them be prepared. And with his movie and TV roles, the list will give a grown man nightmares. Known for his role as the outspoken Merle Dixon in AMC’s “The Walking Dead,” Rooker has also starred in Henry: Portrait of a Serial Killer, The Dark Half, Slither, Super, Hypothermia, Brother’s Keeper, Marvel’s Guardians of the Galaxy, Bolden!, and many other titles. He’s also loaned his voice to numerous video games, including Call of the Dead, Lollipop Chainsaw, Call of Duty: Black Ops II, and The Walking Dead: Survival Instinct where he reprised his role of Merle Dixon.

Michael will join our crew out in Los Angeles—leading the charge as the commander of the ZSC’s specially trained Special Forces—when the zombies rise and dare to attack. Can we start taking bets now? We bet when they see Rooker shoulder to shoulder with his fellow ZSC commanders, the undead will shamble right back to their graves.

Weapon of Choice: Primary Weapon of choice – H&K 417 chambered 7.62 millimeter (only rifle in world with ability to switch from regular fire to silencer on the spot); Accessory for the primary – an XM320 (Grenade Launcher Module) that can be attached to rifle barrel or used as a stand alone weapon…
Backup – M1911 standard government issue model, as sidearm.
Second Backup – A Benelli M1, 12 gage semi-automatic shotgun in his pack with double aught buck and slugs.

You can find Michael at these links (just click on the photos):

Proud member of the Orange Brigade