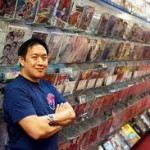 As the driving technical force behind the View Askewniverse, Ming Chen has been with the company since 1996, a year before Jay and Silent Bob’s Secret Stash in Red Bank, New Jersey came into being. Chen captured Kevin Smith’s eye with his fan-made Clerks website and now tackles the web work for Smith’s View Askew and SModCo empire. Along with his computer prowess, Ming works at the Secret Stash, is the butt of all jokes on AMC’s “Comic Book Men,” and hosts S.I.R. podcast, “I Sell Comics!” with Michael Zapcic every Thursday.

When he’s not playing whatever sport catches his eye—hockey, baseball, football, and basketball—or training for the pending zombie apocalypse, Ming donates his tech skills pro bono to Street Poets Inc. and The Kenny Gordon Foundation.

Weapon of Choice: A good ol’ fashioned baseball bat. Like the one Robert Redford used in the movie ‘The Natural’