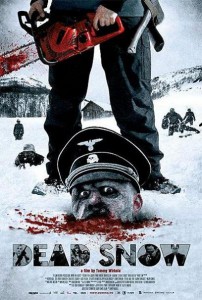 Don’t ask me why I’m on a foreign movie kick lately. They are just… there and some of them happen to look halfway decent before clicking play. Dead Snow (2009) is a good example of judging a book by its cover. The poster art for this film was what caught my interest while looking for the next movie to sink my remaining teeth into. So, I thought, why not give it a go?

Dead Snow starts with a random scene where a mostly unseen menace chases a girl through a snow-covered forest. Makes not a lick of sense and I’ve come to expect that with a lot of the movies I review, to be honest. We’re then introduced to the main cast, a group of pre-med students who’ve decided to spend their Easter vacation at an isolated cabin. These early scenes where the friends banter back and forth are painful and drag on for long enough to be considered torture by the Third Geneva Convention. Things don’t begin to get interesting until a Creepy Old Man™ shows up out of nowhere to explain why the students are idiots for staying on that mountain.

What has the old coot shaking in his fur-lined boots?

That’s not a typo. The old guy tells a (rather long) story about a regiment of Nazis that were chased out of a local village after tormenting the residents and stealing all of their gold. No one knew where the regiment disappeared to after they made their way into the mountains, but legends suggested they became the undead, hunting the landscape for people stupid enough to tread on their turf.

After that we finally get in on the zombie action. The Nazi zombies are surprisingly agile and quick, despite the extremely cold temperatures. And, I’ve got to say, the makeup used for the movie is great. Aside from the cheesy plot and questionable acting at times, the best parts are during the series of attacks that round out the latter half of Dead Snow. It was easy to get wrapped up in the action when blood flowed like water in a stream during spring. I’d estimate that filmmakers used enough of the red stuff to fill an Olympic-sized swimming pool.

I’m giving Dead Snow 3 ½ dismembered bodies out of 5. The ½ being for my favorite scene, a moment shot from the point-of-view of someone being eaten by zombies. I’ve never seen anything like it before… except at the moment of my own death. This is a good movie to watch on a lazy weekend afternoon. I’d skip the popcorn, though.