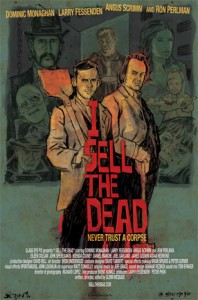 I stepped outside my norm with this film. First, I Sell the Dead is a period piece. Secondly, this isn’t so much a zombie flick as it is a movie that happens to have zombies in it. Third, I let the casting sway my decision to watch. Hey, Dominic Monaghan made an impression in those movies about a ring or some such. Curiosity forced my hand. Good thing I’m not a cat, huh?

The film takes us through the career of a grave robber while he’s delivering his gallows speech to a no-nonsense priest. Right off the bat, what caught my attention was the humor laced in the script. There were moments that felt like one of those weird stage shows, very Waiting for Godot without all the, you know, waiting. Well there was some waiting, but that was me waiting for zombies (until I got impatient and looked in the mirror).

Via flashbacks we watch our friendly neighborhood grave robber become an apprentice and learn how, exactly, to break into a coffin. As time progresses he teams up with his mentor to grave rob as a full time job. They are forced by the tight grip of the law to look to other sources outside graveyards to procure corpses for the doctor that’s hired them. Their first try introduces the pair to the reality of vampires. After they successfully deliver the vampire’s body, the strange dead and undead begin to find them. Including the corpse of an alien, which sparks a turf war between rival grave robbing gangs. Apparently, being a ghoul is profitable enough to kill over. Who knew!

Eventually, as always happens, the final bit of fun and games happened when someone accidentally discovered packing crates filled with zombies. Our grave robbers are led into the fray by a pair of perky breasts disguising a ruthless heart and there’s a proverbial tug of war with the animated corpses that ends with someone losing their temper…and several important body parts.

While witty, some viewers may find the pacing of I Sell the Dead a bit of a turn off. This is not your usual horror flick with tons of jump scares, though it has a few moments where you don’t know whether to laugh or shriek. I give this movie three and a half severed arms out of five. If you want a dose of British humor with a swig of the morbid and dash of paranormal monsters, check out I Sell the Dead.