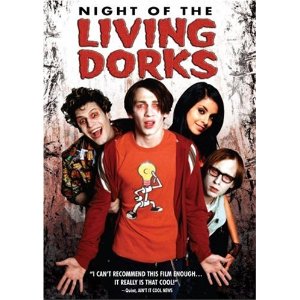 I think I’ve figured out why most modern zombie movies are aimed at teenagers. One- Teenagers are very tender. I’m not talking about mushy love stuff, here. Their muscles are still growing, developing. That makes them easier to chew. Two- Sex sells. Easy to understand that, right? Teens are driven by hormones and it is too easy to prey on that. Throw in boobs, a splash of blood and a few intestines; ta-da! instant zombie movie.

Night of the Living Dorks (2004) is the English translation of a really crass, humorous German zombie flick. Actually, it is the only film I’ve reviewed to date that I’ve seen once, before re-watching to review it. Even the undead have funny bones to tickle.

The movie dumps us into the world of three friends who aren’t exactly the most popular kids in school. As a matter of fact, they are laughing stalks, constantly being harassed by the school’s rugby team. And of course, one of the so-called “dorks” has a crush on a jock’s girlfriend. This is where things get weird. In a bid to win her affection, he turns to a group of Goths that dabble in Voodoo in order to convince them to do a love spell. The girl in the group, an old friend (and maybe someone that likes our dork), tells him to meet them at the cemetery to watch a ritual meant to revive the dead.

Needless to say, something went wrong.

Bumbling antics and a good, stiff breeze, alter the spell and after our trio of awkward friends leave the cemetery, they die in a car accident… only to wake up hours later in the county morgue. Great. Now they’re dead, dorky, and still don’t have any luck with the ladies.

Their luck slowly changes. As do their appetites, but devouring humans comes with a price. They begin to decay… and some “favorite” parts are snapped off just when victory is in hand. Luckily one of them carries a staple gun for emergency reattachments. (Can you say, ouch?!)

For them, like so many, the life of a zombie isn’t all they thought it would be and they turn back to the cute Goth girl for a cure. Wimps!

The juvenile humor in this movie alone gets a 3 ¾ severed fingers out of five. It’s American Pie with rotting body parts.