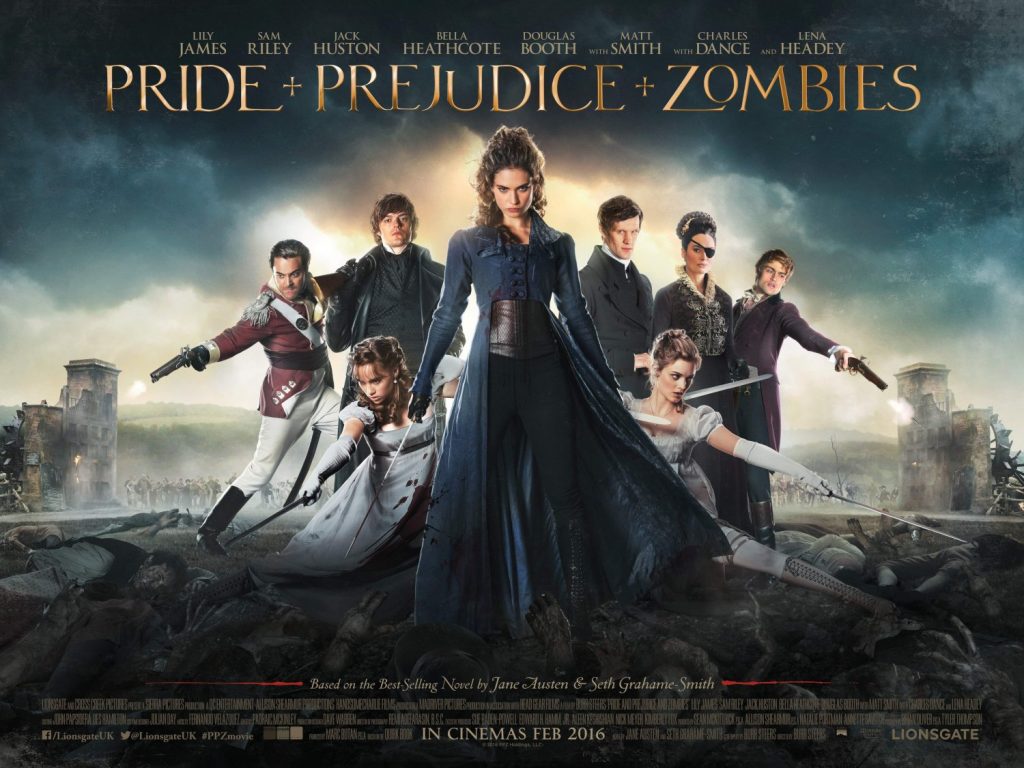 Pride and Prejudice and Zombies delivers a timeless tale, rife with fighting, set in a post-apocalyptic, yet historical era. You can’t deny that it is oddly satisfying to watch a group of accomplished young women mow down a ballroom of zombies with naught but long daggers—which were concealed under their gowns—and some serious martial arts skills. Are there issues meshing the worlds? Of course. In the end, the film is visually satisfying enough to overlook most of it. As a boon, fans of the Pride and Prejudice story still find enough of the source to reconnect with their favorite characters in a whole new way. Or, as is one case, finally come to somewhat like what is possibly the most annoying character in literature. 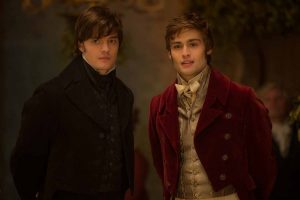 Sam Riley and Douglas Booth in Screen Gems’ PRIDE AND PREJUDICE AND ZOMBIES.

The Pride and Prejudice story has enough twists and turns to make it a compelling tale. Adding in the undead posed a particular problem: How to keep the romance in the forefront without compromising a solid story about love’s place in the social structure by changing the setting to the apocalypse. In order to achieve this the quickest way possible, the film doesn’t open with the Bennet ladies and their marriage-worried parents—I will note that post-apocalypse Father Bennet has no interest in wedding off his daughters, only training them to survive. Instead, it begins with Darcy on the hunt for a zombie hiding in the midst of the upper crust. As far as first impressions goes, it’s a pretty sharp introduction. The first zombie isn’t a rotter, held back from the full transformation because he didn’t consume human flesh. Nevertheless, he’s infected and must be dispatched. It’s the first-person point-of-view kill which ruins the scene’s impact. Darcy is cunning and ruthless, then there’s this cheesy head-rolling moment with the camera. When it recovers from the point-of-view shift, the camera pans upstairs to a second, far more detailed zombie before the scene changes. The scene is crammed in before the traditional start to the PaP story, and the outcome of Darcy’s escapade, plus his failure to kill the second zombie, is dragged in again as a way to bring zombies to Bingley’s first party. At least it isn’t a single-purpose moment. 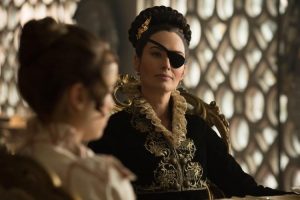 For the most part, the story itself is predictable if one is aware of the source material. There’s very few surprises, like Lady Catherine’s part as a one-eyed, sword-wielding leader in the human forces fighting the dead for control of London and the surrounding countryside. Even Wickham’s true nature, beyond being a cad and a narcissist, isn’t really shocking if one follows the natural progression of how the original book unfolds. I would’ve liked to see more effort to adapt the full story into something different. Lady Catherine remaining on the side of the angels bugs me in particular, seeing as she’s pretty awful to Elizabeth no matter what incarnation of PaP is being told. It would’ve been more shocking for her to side with Wickham over a common undead state than to willingly take in the Bennets, whom she sees as barely above her lady’s maid in social status. 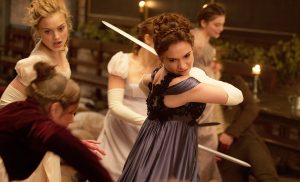 Lily James and Bella Heathcote in Screen Gems’ PRIDE AND PREJUDICE AND ZOMBIES.

This is one horror film where it’s hard to do what we’re accustomed to: hoping all the lead characters bite the big one. Primarily, PaPaZ is a romance with relatable, quirky characters. The zombie war is there in the background to give Elizabeth and Darcy something to bond over, to put them on equal footing at last. That’s the big difference in this retelling of the classic. Elizabeth isn’t some seemingly-damaged suitcase her parents try to sell Darcy—and any other man without a bride— with no concern for her feelings. Yes, Mrs. Bennet’s marriage obsession plays a huge role in breaking apart the primary couple, as it always does, but it’s not as depressing as usual when looking at what Elizabeth has accomplished without a husband. Her prospects with zombies raiding England are better than they were in the actual historical era, all because their new society saw an education with the key sources far beyond the country’s borders as the only way to survive the menace—looking out to find a way to fix the problems within is something few societies embrace. Her progress in women’s self-empowerment doesn’t stop the entire Parson Collins plot from happening, though. He still arrives, annoys, and marries a Bennet daughter. Only this time around, Collins is somewhat tolerable because Matt Smith made him a bumbling fool, not a man coldly calculating how to sleep his way ahead in Lady Catherine’s good graces. Collins provides another opportunity to sew zombie conflict into the Bennet’s lives, but the potential went unchecked. The writer had a focus; Wickham’s established part as villain would be upheld. But why is he the villain? Why not any of the numerous people in Elizabeth’s life who degraded her for her gender or her place in society? Answer? He took a woman (property in the era) without permission. It’s a trope so old, I really hoped it would remain in the classic story and they’d do something different for the Wickham/Lydia plot. 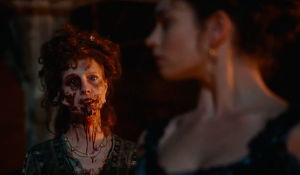 The zombies in the film range in appearance. For the most part, they’re seen at a distance in groups. Few zombies get the close-up treatment, even fewer actually show grotesque wounds like traditional undead depictions. When the camera does get up close and personal with a zombie, I cringe. The design overall is great. Having undead waltzing around in these grand gowns and waistcoats strikes an oddly-pleasing discord. The illusion blows to pieces when one realizes there’s little practical gore on the actors. Featured dead have digital wounds; presumably to enhance the ick, plus make wounds deeper and move naturally during dialog. However, even the church girls on-screen for all of a minute appear to have digital rot on their cheeks instead of practical makeup. That’s where the design decisions stop making sense and become a headache for genre fans. The film cost enough without making the makeup digital. In a way, it feels we were cheated from a proper zombie battle scene because of the zombie design relying on digital gore. Yes, there’s a rather tense bit toward the end when they finally confront Wickham and the undead at St. Lazarus, but the camera is pulled back. Distance from the main threat in the film leaves the undead with the menace of a mosquito, not a lion hunting the countryside. It robs a little justice from Lydia’s rescue, as well, when there’s no real danger from zombies who are too far away to see clearly.

Overall, Pride and Prejudice and Zombies delivers what it promised: A classic story with zombies wandering in to seriously ruin everyone’s day more than Darcy’s absent sense of humor. Is it a perfect retelling of Austen’s novel? Hell no. Is it a decent zombie flick? Yeah, I’ll give it that. PaPaZ gets four majorly dislocated jaws out of five. Grab the film to enjoy beautiful things covered in blood n guts, stay for the witty snits between Darcy and Elizabeth.