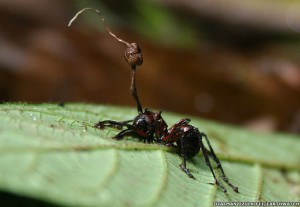 You know… for months now Juliette has insisted that the Command Center is infested by zombie termites. At first we all laughed at her very obvious ploy to pass blame on a fictional creature. But after reading what Anthony sent our way… she might have a point. Only this commander thinks the termites are actually ants.

Earlier this week we received a coded message from an unknown email address. It took the better part of two days to crack, but within the email was a link to a news story most of us thought was a hoax.

Along with the message we received assurance from Anthony that the article’s content is legitimate. His current condition is unknown. We are attempting to establish contact again, but so far no luck.

When you stop to think about it— we’re all doomed.

What? We are. Look at the facts. This fungus very effectively shuts down a host’s system while still remaining in control of all the motor skills. Not only that, it uses the host to replicate itself. Should the fungus morph and take over larger beasts, we’re doomed!

I don’t know about you all, but I’m double checking my go bag and stashing it right next to the door. With this fungus in scientist’s hands the waiting game has begun. How long until they find a way to make a biological weapon based on these zombie ants? I hope we never find out the answer.

Now, does anyone have an extra bowie knife? I dented mine during training the other day.