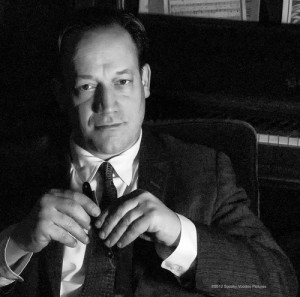 With years of experience playing, directing and battling against any and all manner of all dead, undead or just mostly dead behind him, Light Blue Brigade’s First Lieutenant Ted Raimi already has the single most important weapon to survive the pending Z-pocalypse – expertise.  Situated in an undisclosed location somewhere near Los Angeles alongside Commander Anthony Guajardo, Smith & Wesson in one hand and cattle prod in the other, Raimi brings that expertise to the front lines, and ensures that the western coast is well protected and prepared.

Ted Raimi first arrived on the screen in 1981, appearing in the now infamous and wonderfully nauseating Evil Dead, where he got an early taste (excuse me) for dealing with… well… evil dead. He went on to appear in many films, including Midnight Meat Train, Drag Me to Hell, and a small but memorable role alongside fellow First Lieutenant Sean Patrick Flanery in Masters of Horror: The Damned Thing. On the smaller screen, we’ve seen him in episodes of Supernatural, Code Monkeys, Legend of the Seeker, Xena: Warrior Princess, and Your Dungeon, My Dragon. 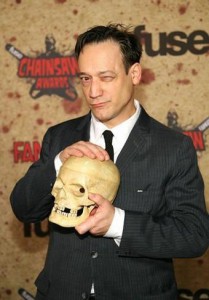 After very extensive investigations, this reporter has uncovered what may be an awkward and uncomfortable truth about First Lt Raimi’s true intentions. It seems he has in the past connected with the Zombie Rights Campaign, a fringe operation devoted to supporting the rights of the mindless creatures that may replace us at the top of the food chain in the very near future. It is this reporter’s opinion that such a group could only be a cover for something much more nefarious, which brings to light the possibility that LT. Raimi’s motives for accepting the role of ZSC leadership may not be what they seem. However, more extensive recon has failed to turn up any further evidence of questionable activities. For now, we will adopt a cautiously optimistic wait-and-watch stance, and trust in Our Fearless Leader’s decision to bring him in without question. He is Ted Raimi after all.  When it comes right down to it, he’ll be right there with us on the second rung from the top of the food chain on Z-Day.

Be sure to keep an eye out for Mr. Raimi’s future endeavors, including Attack of the 50 Foot Cheerleader in 2012. In 2013 we’re expecting to see Mr. Raimi in Oz The Great and Powerful, a prequel to The Wizard of Oz which will (unfortunately) probably not have any zombie story lines. We’re also keeping a watchful eye on High Midnight, which is currently in production.