Welcome back to another round of myth bashing, Zombie Survival Crew style. This series is dedicated to uncovering the truth behind the tales one might hear while preparing for the Zombiepocalypse. We’re here to make sure you don’t end up digesting in a zombie’s stomach early on because you followed bad advice.

Myth: When being chased by zombies, the only safe place is to climb up a tree. 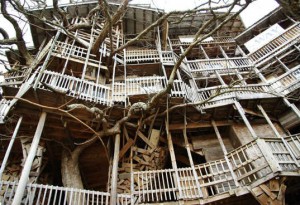 Fact: There may actually be some truth to this one.

It takes a good amount of coordination to be able to climb a tree. Most adults loose the flexibility (and lack of sense) necessary to traverse the tricky feat of making it more than one or two branches off the ground. Zombies are often encumbered by broken or missing limbs and severe muscle damage resulting from decomposition. They can hardly walk in a straight line, let alone direct their bodies to accomplish the difficult task of climbing.

But that isn’t to say they cannot make it up the tree somehow.

What the undead lack in motor skills, they make up for in sheer numbers. So sure, you think you’re fine and dandy sitting up in the branches of a tall tree, carefully picking off the zombies clawing uselessly at the trunk, but they’re drawn to the noise of the gun and the fuss their cohorts are making. Bodies pile up quickly. It is a lot easier to scramble on a writhing pile of moving corpses that don’t get upset when you step on their faces—there’s more horizontal surface to work with, therefore requiring less muscle. It wouldn’t take a large horde very long to build up enough for one zombie to body surf up and cling to a branch.

The question is, how dangerous would a treed zombie be?

Probably not very dangerous. What would kill you is dehydration, starvation, and exposure to the elements. Even if you make it up the tree with your heavy go bag in tow, it won’t have enough in it to tide you over until the horde disperses. They have one focus—food. And guess what? You’re the only item on their menu once they catch your scent.

However, we are not opposed to camping out in a sturdy and well-secured tree house. First of all, the idea just sounds cool. Secondly, if you use a rope ladder that can be pulled up and a very tall tree, there is very little chance of a zombie making it all the way up to your safe haven. This idea only works for individual survivors and not on a permanent basis. Hauling enough supplies to live on up a rope ladder would be backbreaking work, even if you pre-stored most of your items before the attacks began. We suggest using a tree house as an initial “get out of Dodge” location before moving on to a ZSC resupply station in your sector. But make sure you aren’t followed. Once a group of zombies surrounds your tree, getting back down to the ground to move on to a safer location will be very dangerous.