It’s time for another round of myth bashing with your Zombie Survival Crew commanders. We do all of the research on the myths you guys send our way to be sure none of us end up chow during the Zombiepocalypse.

Myth: Cutting off a zombie’s head is just as good as destroying their brain. 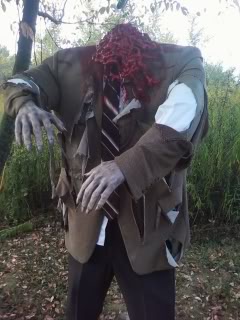 Fact: Taking shortcuts will get you killed.

Did you know that the human brain can survive up to two minutes without blood being actively pumped to it from the heart? That is a normal brain in a normal body, without any zombie funny business mucking things up. Neat, huh?

Now we have to mix in the various definitions of zombies—all of whom in fact have no heartbeat to drive their bodily systems. Zombies undergo a reversal of sorts from how we are hardwired to function. The animalistic portion of the brain drives them and that’s it. The nervous system, which regulates heartbeat and lung function as well as pain receptors, doesn’t come back on line. Essentially a switch is flipped and they become eating machines without the ability to step away from the meal and say, “I’m full” because that portion of their body just doesn’t function.

What does that have to do with decapitation? Everything.

Zombies do not need their bodies to be attached to their heads in order to “live”. Everything is contained within their grey matter. So even if you send their head flying a good fifty feet away from the rest of their body, the zombie will still attempt to sate the unrelenting hunger propelling them through the world. This doesn’t pose much of a threat unless you leave the head lying somewhere without destroying the brain. Someone could walk past unawares and get within biting range. Ankles biters are still fully capable of infecting someone. That infection will be brought back to your base camp.

Boom. Outbreak amongst the survivors.

Not to mention, leaving a zombie’s head to lie there snapping at passing squirrels and hikers is simply inhumane. The ZSC has always taken the stance that if you must kill an infected human or dispatch a zombie, do it as humanely as possible. If you were in their shoes would you want to become a potential soccer ball for the undead? I think not. So yes, decapitation works, but only to neutralize the threat. After that, you must destroy the zombie’s brain so there are no accidental attacks.