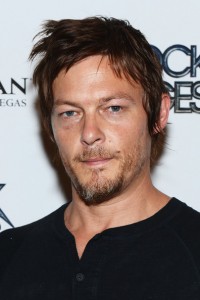 Blue Brigade, meet your commander Norman Reedus! This multi-talented actor, filmmaker, photographer, writer and artist has played an Irish vigilante, a sociopathic murderer, street gang leader, a conspirator, the unfortunate snack of cannibalistic humanoids on a deep-space vessel, and – of course- a beloved redneck zombie killer and survivalist. 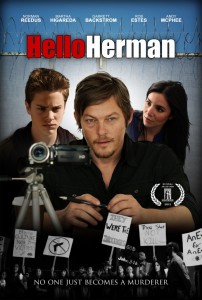 Norman now has three seasons under his belt as a fan favorite with AMC’s wildly successful zombie apocalypse survival drama The Walking Dead, and even after bidding a very tearful farewell to his onscreen brother, he is still working his crossbow-firing fingers to the bone.  Norman is currently filming the fourth season, set to air sometime in October 2013 (We’re still waiting on an exact date, so just clear your Sunday schedule for all of October for now). Norman recently attended the premiere of Sunlight, Jr at the Tribeca Film Festival, and the much-anticipated film Hello Herman is scheduled for release next month. 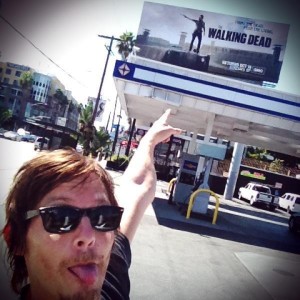 Between filming, interviews, podcasts, magazine photo shoots, and the never-ending parade of convention appearances all over the world, Norman still can be counted upon to reach out to his fiercely devoted fans through social networking outlets whenever he can, even when we are sure he should be getting a little shut-eye. For his tireless and exhaustive efforts to spread the word, keep hope alive and fearlessly face the shambling hordes time and time again, the Zombie Survival Crew salutes Blue Brigade Commander Norman Reedus.