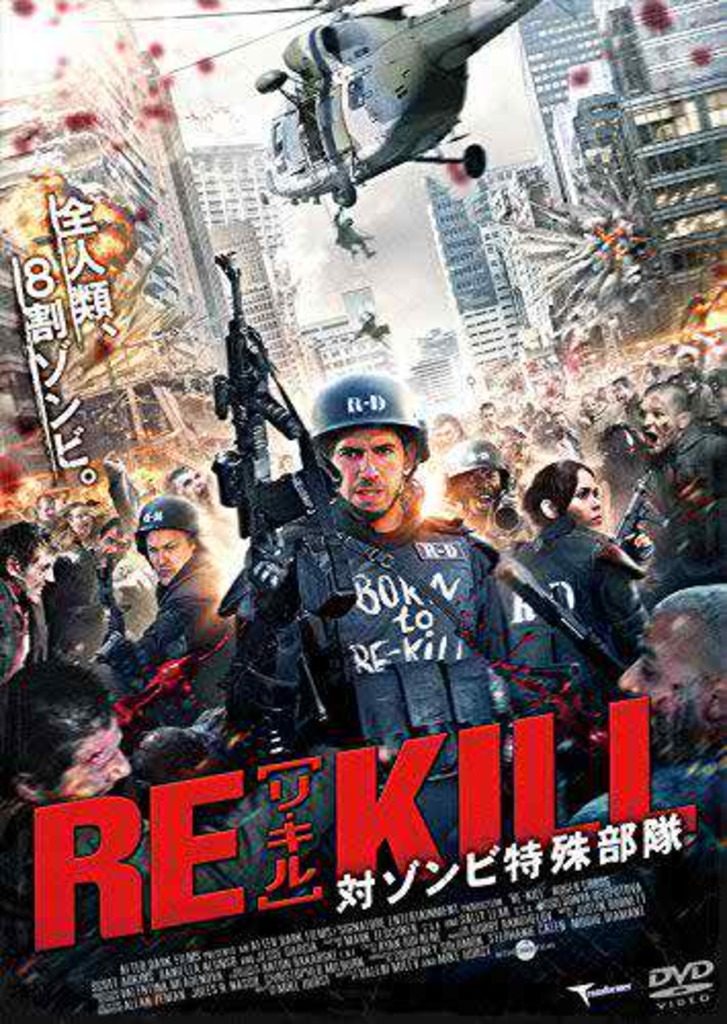 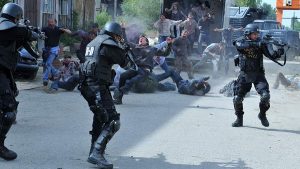 What I love about the promo for Re-Kill is it presents the film as a serious Cops/SWAT team action flick. It really isn’t. The format is far, far different. We’re watching a reality TV show within a movie, essentially. There’s even a slew of eyebrow-raising commercials, including promotional material from an agency tasked with promoting procreation. So after some serious bloodshed, it flashes to a steamy boudoir scene used for sexual propaganda. The first time it happens, it’s a tad startling. Each subsequent time, one’s mind treats it like an actual commercial and tuning out to do something else is an impossible urge to fight. It’s not until the final act that things get serious enough to really snag one’s attention, primarily because the commercial breaks are so outlandish, it kills the tension and they’re forced to start all over again to put viewers on the edge of their seats. Sometimes doing something quirky doesn’t work as planned. 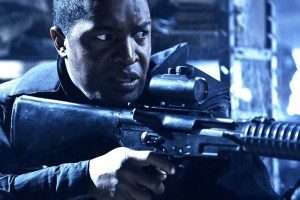 Five years after the zombie outbreak, the entertainment industry has found a way to make a buck from the catastrophe which killed 4.5 billion people worldwide. Case in point, a popular reality TV show called Re-Kill, which follows random squadrons in the newly formed R-Division. The R-Division are the frontline when it comes to containing the undead within the quarantine zones, as well as taking care of any pop-up outbreaks in the United States. Being on the frontline means they’re also painfully aware that things are getting bad again. One squadron is wiped out on live-TV, save Alex Winston. Winston’s new squad has much better luck remaining with the living, completing a couple missions before things start to get weird. Why would someone drive a truckload of re-ans (zombies) into a quarantined zone? The government interrogates the truck drivers and learns of something called the Judas Project hidden in the middle of re-an occupied territory. Since the squad is already familiar with what’s going on, they’re tapped to venture into The Zone, formerly New York City, to investigate. They never expected to find a city of undead who’re smart and forming an army under the leadership of a re-an nicknamed Elvis by now-dead scientists in the failed Judas Project. 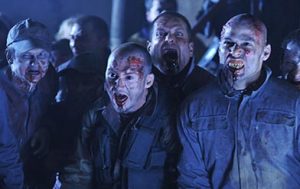 Without the commercials breaking up the action, the premise has promise on paper. The actors are pretty stellar; it’s a pleasant surprise to step into the last half of the movie and realize Dark Matter‘s Roger Cross is the new squad’s leader, Sarge. Bruce Payne really nails Winston’s complex moral code, all while being creepy as hell. There’s some characters who’re a tad too abrasive, like every dudebro stereotype is crammed into gun-wielding nutjobs who get their rocks off killing former humans. As for plot? There’s really not one until the final “episode” begins, which is far too deep in a film to finally go, “Oh, by the way, there’s this bad thing happening and we should stop it somehow.”

The production didn’t expend too much effort on the re-an FX makeup, probably because this film is shot first-person POV and once the action starts, hardly any of the zombies get a decent close-up. The basics are good enough here—pale and mottled skin, dark veins, and jagged teeth provide just enough visual cues to sell the look. There’s a small group of hero zombies, but the only difference is they’ve got more veins or a very specific facial wound. Like a lot of shoot-’em-up zombie films, these zombies are terrifyingly fast and move erratically. If they’d used shambling re-ans, the film would have been intolerably slow.

For failing to be what is promised in the promotional material, Re-Kill still manages to check a few boxes on the list genre fans keep in order to determine if a film is worth their time. At the very least, it’s a great excuse to watch people mow down zombies. However, be prepared for a fight to stay interested once the faux commercials kick in. Overall, I give Re-Kill three shattered jaws out of five.