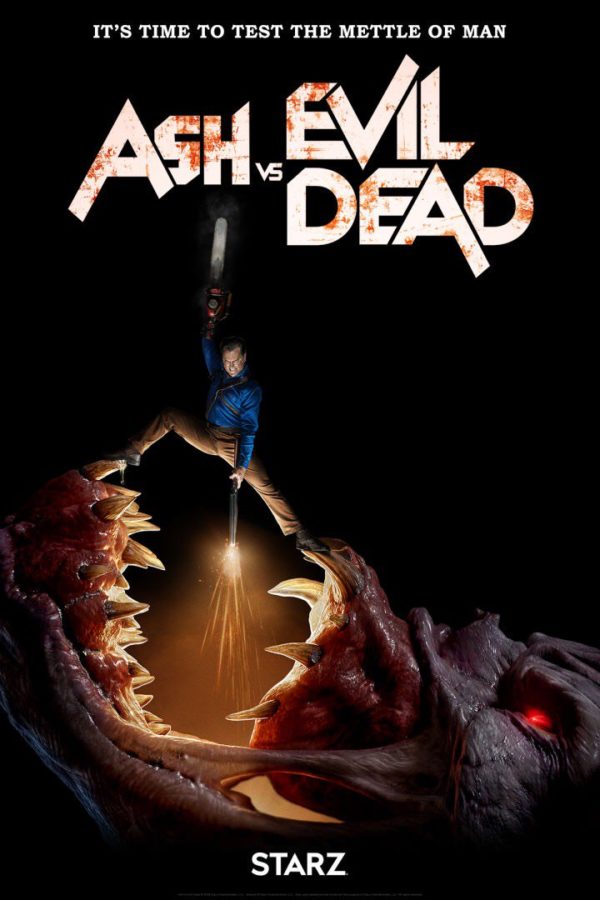 Family:
Review for Ash vs Evil Dead 301
by A. Zombie

Yo, pal. Before you go on, just know there’s episode spoilers ahead. 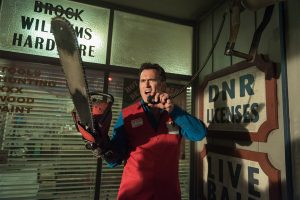 Finding a space for himself in the world took many, many years. At last, Ash Williams has just about everything he wants: a business to call his own, a house, loyal friends, and fame. Best of all, Evil’s off his back and sulking in its own realm. All that’s missing is a family to greet him at the end of a long day managing Ashy Slashy’s Hardware Store and Emporium. For now, though, Ash relishes in good wishes from the folks of Elk Grove on the evening of his grand opening.

The most magical part of this show is that anyone who saw Ash’s utterly ridiculous commercials, complete with adult “toys” and vulgar jokes, then thought, “Hey, let’s go party with that guy tonight!” Fame really does get a person far in life, it seems. Good for him?

The good life put Ash and Pablo at ease. Kelly doesn’t look so relaxed. Matter of fact, she’s the first to react to the initial signs that something isn’t right. The Ghost Beaters spent their time off from Saving The World duty chasing vastly different interests. Kelly, it seems, is interested in stopping yet another apocalypse. Not sure that’s how I’d spend my time off from thumping drunks at a bar, but okay. To each their own. At least she’s not hunkered in a fallout shelter training to fight by herself. Dalton is there by her side, waiting for a chance to meet El Jefe. What’s his interest in the retired deadite slayer? As the leader of The Knights of Sumeria, Dalton needs Ash’s help to defeat The Dark Ones.

First, they’ve got to defeat the growing problems caused by a known threat hiding right in their back yard. 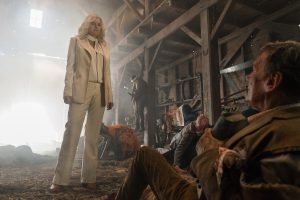 Patience is a virtue well rewarded. Ruby’s played the waiting game long enough. On the same night as Ash’s grand opening, she tracks down the Necronomicon in the hands of a young woman and the television antiques appraiser she has giving it a once-over on live TV. Violence ensues. Of course. With her prize in hand, Ruby holes up in a motel and performs a ritual in which she ingests blood mixed with Ash’s image in the Necronomicon. When mommy and daddy love each other very much, a stork drops a hellchild in mommy’s cabbage patch. Ash is going to be so surprised.

Not as surprised as he is to be reminded that he’s got a wife, and said wife hid a whole child from him for all these years. Candace Barr has her reasons for keeping Brandy in the dark about her chainsaw-wielding father. Unfortunately that’s the very reason he has to come back into their lives. Evil targets Brandy while she’s cleaning up some creative graffiti at the high school. Her friend Rachel winds up a deadite, using the music room against Ash and Pablo as they attempt to save Brandy. In the end, it takes Candace’s sacrifice and Ash’s creativity with found weaponry to put Rachel to rest. Kelly and Dalton take care of the possessed mascot who nearly cuts the family drama portion of the show short the same instant Ash attempts to be a father at last.

Thankfully this time around Ash isn’t above taking help to wipe out whatever Ruby’s unleashed. The Ghost Beaters reunite, with the new guy on board as well. Brandy is along for the ride, if Ash can even remember to call her by the right name. Time will tell if Pablo’s returned skin art spells certain doom for the team, or if it’ll give them an advantage. 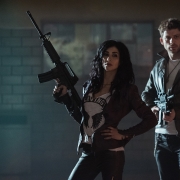 Brandy’s written to mimic her father, only refined slightly and thinking with something more than teenage hormones. There’s bound to be countless sarcastic fights in the episodes ahead. Can you imagine Ash trying to bond while they’re all crammed in the same car? What happens when he tries to console her about her mother’s murder? Tact, thy name is not Ash Williams. It’s not like they can stop to get a break from each other, either. There’s a bounty on Brandy’s head. If they stay put too long, whoever’s around is at risk.

Speaking of heads, I’ve got to say the harp gag is one of my new favorites. Unfortunately the sequence beforehand is somewhat lackluster and has pretty much the same routine as every other “Ash fights an inanimate object” fight. Not every gag’s a winner, not even the tried-and-true ones from the past. Let’s hope they get past using this sequence as a crutch and give us more unique special effects shots as the season unfolds.