Spoiler warning! There, now you may proceed.

Glenn lives! No, I couldn’t wait to say it. Plus, it’s how the episode opens. Yet again, we backtrack in time to follow what happens after Nicholas’ body dragged Glenn off the dumpster. As I thought, the walkers tear into the warm corpse, leaving Glenn untouched, but traumatized. While they’re distracted, he shimmies under the dumpster. Several walkers give chase. This feels a lot like Glenn’s introduction on the show. You know, when he saved Rick — a mistake, if you ask me — after the former sheriff’s deputy crawled under a tank. Only there’s no one to bail Glenn out of this situation. He’s on his lonesome. Killing the walkers posing the most threat creates a rather effective barrier to seal off his cubbyhole. Now all he has to do is wait for the walkers to lose interest . . . before his water supply runs out. The coast clears after what probably feels like an eternity when crammed under a reeking dumpster. Glenn slithers through the dead walkers. His first concern—water. Nicholas had a bottle on him, but it’s empty. 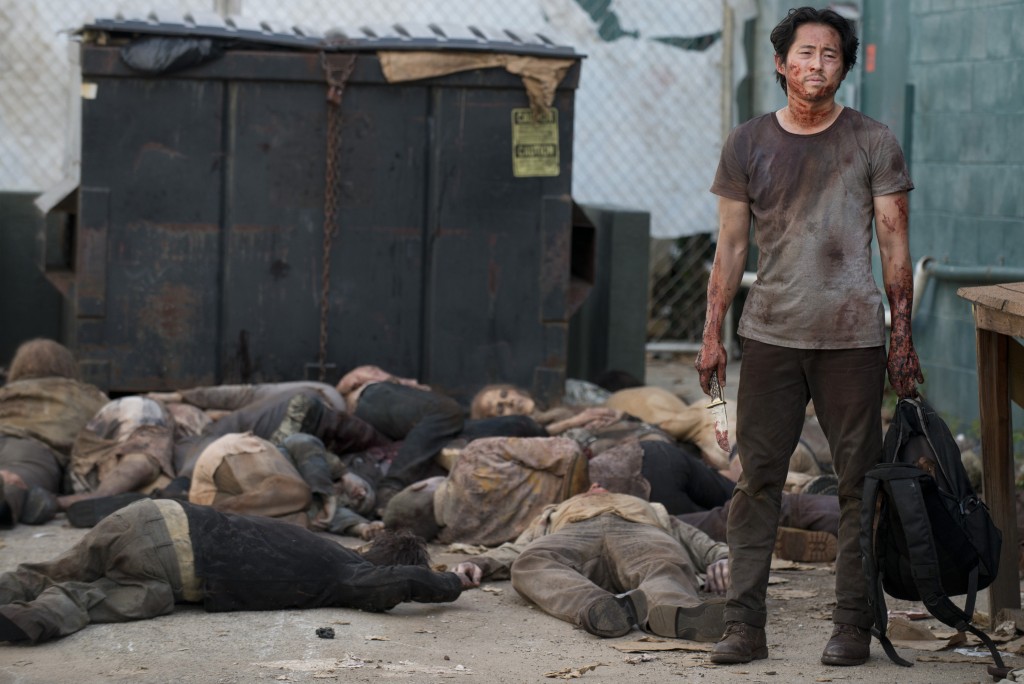 That’s okay, Enid just happens to be in a nearby building. Her first attempt to give him water results in a puddle. Glenn breaks into the antique store, following his only hope to find water in a timely manner. Desperate for news about Maggie and Alexandria, he attempts a civil conversation. Enid, written to be one of the most incoherent characters to date, bolts for no reason. There’s a lot of back and forth. At one point Glenn nearly leaves the girl, but Maggie wouldn’t like it so he goes back to drag the girl to Alexandria. Along the way, they grab some balloons—possibly useful against walkers, mostly to fill a plot hole explaining how Glenn will signal the crew at the episode’s end. This would be far more entertaining if Enid weren’t Carl with breasts. She has no personality beyond sullen teenager who’d seen too much. Which is literally everyone on this show, no matter their actual age. 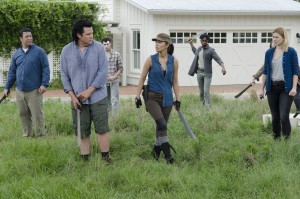 Back in Alexandria, it’s more of the same ol’ same ol’. Maggie is ever-vigilant for Glenn’s signal. Rick, insensitive to the core, dismisses concern for her husband and redirects the conversation to how to move retrieve the cars from the quarry and move the walkers. Father Gabriel sets up a prayer circle, like that’s going to make a difference when the morale inside the walls is already shot to crap. Speaking of shooting, there’s more sullen teen angst action between Carl and Ron when Rick takes Ron out for his first official gun lesson. Like a d-bag, Carl interjects some smart comment every time Rick shuts his mouth. Even I want Ron to at least wing him with a shot by the time the real feces hits the fan later on.

Can Morgan live with Rick if he won’t kill? It’s not even a matter of staying in Alexandria at this point. Deanna would have no problem keeping the pacifist around. Morgan pulls his weight and has deep insight to what would motivate future human attackers. He’s an asset. Rick sees only a threat looking at the man who is the only reason he even made it to Atlanta for Glenn to save, thus introducing him to the people forming his little kingdom—and by some ridiculous default Carol is in agreement, simply to keep her relevant in the episode. There’s no logical reason for Carol to be this distrusting. She’s written so oddly this season. The writers backtracked hardcore on where her trajectory lead—sociopath land. Sociopaths don’t care what happens in a society, even one this small, unless it impacts the way they live. Morgan isn’t a threat to Carol; she shouldn’t be so invested in undermining his position in their community. This whole witch-hunt is added to drum tension in an otherwise lackluster episode. The only important bits happen in the first and final two minutes. I just saved you forty minutes of your life. Use it wisely. 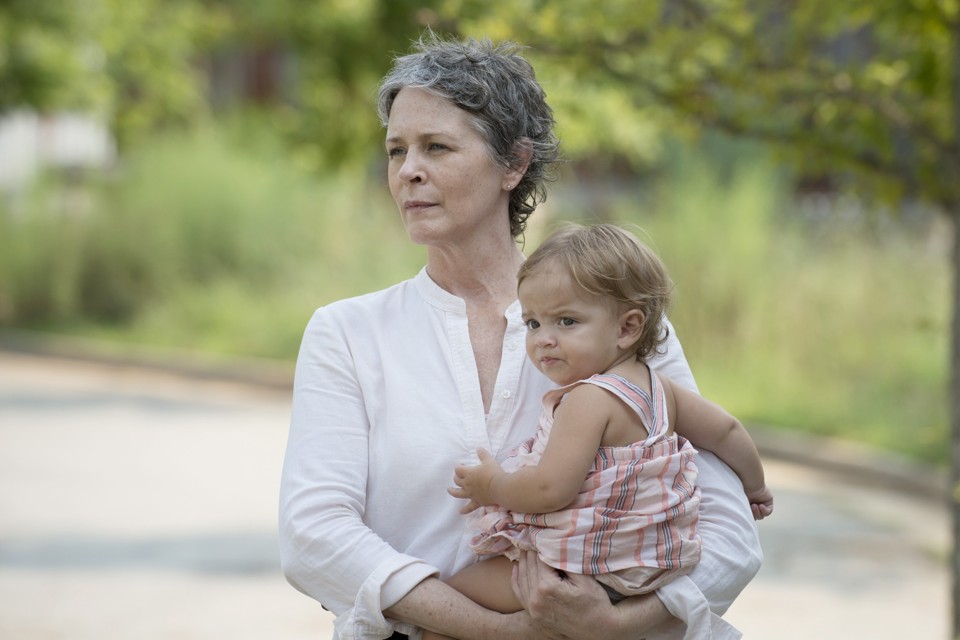 Carol winds up stalking Morgan. Because, how else will they make something epically stupid happen with the prisoner no one else knows about unless poorly-written and paranoid Carol acts as catalyst? First, she has to ditch Judith. Here comes Jessie, a walking womb they dump the kids on without much concern for her as a person. While Carol waits for Jessie to put something away; which takes five minutes too long just so the following conversation can happen between Sam—still upstairs—and Carol.

Sam, “If you kill people, do you turn into one of the monsters?” Carol doesn’t even think about her response. “The only thing that prevents you from becoming a monster is killing.”

Spencer may be the densest character on television. He is nearly eaten playing Batman by crawling across a rope tethered between the wall and the slowly-crumbling church. The grappling hook fails, dumping Spencer amongst the walkers. Rick and others haul him up. Tara risks her life to provide cover fire. In a stunningly stupid move, Rick yells, “Tara! You almost died once for these people. What the hell are you doing?” Facepalm. Headdesk. They can hear you, Rick. Tara’s eloquent response speaks for all. 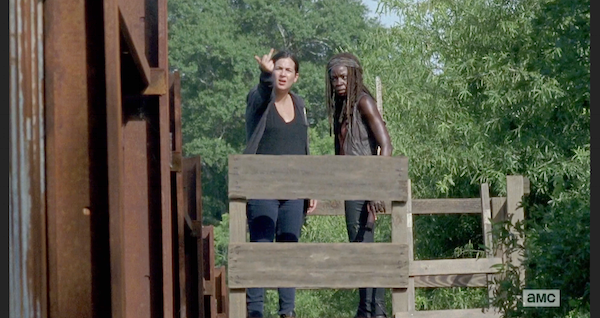 But why would Spencer play piñata in the first place? To go get a car, of course. The same plan Rick hatched, more or less, only executed with the grace of a newborn foal. And why didn’t Spencer tell Rick his plan? Rick listens to himself, no one else. Which is why Rick is literally the last person I would want leading my survival group. His selfishness knows no bounds. Deanna isn’t ignorant to this problem. When she comes to thank Rick and his people for saving her son, she asks Rick why he saved Spencer. “…he’s your son,” Rick responds automatically, then waits for a Scooby Snack. “Wrong answer.” Deanna isn’t impressed. She expected Rick to finally grow to see her people as his after passing the torch.

There’s no time to fix Spencer’s boneheaded mistake. Shortly after Glenn’s balloon signal is spotted, the church belfry topples. The wall is breached. The midseason finale will be a mad dash to either outrun the walkers or stand their ground against, oh, at least five-hundred sets of snapping jaws.