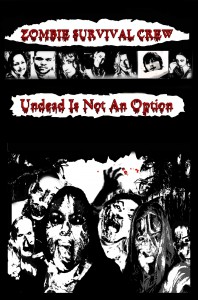 We thought it might be fun to post some excerpts from our very first anthology, Undead Is Not An Option. We had a lot of fun putting this together and want to share a teaser from time to time to whet your appetite. We are proud of the number of commanders who willingly contributed to the cause. The foreword was co-written by our Fearless Leader and Red Brigade commander, Juliette Terzieff, and IronE Singleton, Green Brigade commander.

We are our own worst enemy. For no logical reason we—our collective human family—continue down a long and winding road toward annihilation. Better weapons. Less trust. More fear. Panic. Selfishness. Lack of preparation. Ignorance. All of these belong buried in a landfill, but sadly remain firmly secured in our collective arsenal.

And now as wars unfold in every corner of the world, each addition to the body count increases the fear, and advances notions of the end of the world. It convinces us—even if we are too afraid to admit it in public—that we will be the source of our ultimate earthly destruction.

The fear is hardly new. In fact, it has been taking solid form for decades. Creeping like a ghoul from the grave with every advance in defense technology, with every master of hate to climb the pulpit. And now the walking dead have exploded around us—eclipsing the resurgence of romantic monsters of the past couple decades. Lestat, Edward, and their vampire brethren prowl around the edges, but the shambling hordes control the streets. They are us, and we are them. We cannot escape the truths they reveal.

In the aftermath of World War II and throughout the Cold War years, writers and filmmakers crafted some of the most disturbing post-apocalyptic scenarios ever put to paper or film. The social commentary stung, but rang true. Was there anything beyond the bounds of human cruelty? Given the evidence of places like Dachau and Hiroshima, really, what limits could possibly remain? Through art these visionaries asked people to see beyond the face-level horror to the real monsters in their stories.

Take British author John Wyndham’s book The Chrysalids (1955) set in an über-conservative post-nuclear society where any hint of physical or mental abnormality is considered blasphemy. Those unfortunate enough to display any genetic variance are forced to undergo sterilization, banishment or are killed outright. Family members turn each other in out of fear. Fathers battle sons. Mothers are forced to give up their children.

Out of the question? Hardly.

Or the stunning black-and-white Last Man on Earth (1964) based on Richard Matheson’s I Am Legend in which an increasingly disturbed Vincent Price battles loneliness and sorrow in a Quixotic quest to maintain sanity in a world overrun by vampiric former humans infected by a plague. Desperate to protect his humanity though there is apparently none left in the world. Searching for a reason, a cure, some way to regain a measure of his former life—with no real hope that any sort of happy ending can be possible. Just driven to keep going.

Again is this scenario so far-fetched? No. Not nearly far enough.

To read more, including the compelling words of IronE Singleton, check out Undead Is Not An Option.