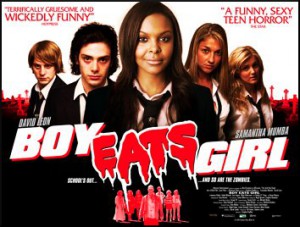 I seem to have stumbled into a cesspit of teen horror flicks. However, while wading through the muck one film caught my eye: Boy Eats Girl (2005). It held just enough “different” elements from the other movies on the list to catch my interest. And, lets be honest, it’s hard to keep a zombie’s attention what with ravenous hunger pains driving us to keep moving.

The first major difference to set Boy Eats Girl away from most teen horror movies is the fact that it was filmed in Ireland. It isn’t often I even hear of a film coming out of the country, let alone one capable of biting and holding on. The second difference to set the film apart? Voodoo. The use of Voodoo in zombie movies went out of vogue a long time ago. Most filmmakers resort to biological warfare or a “Romero” take to zombie creation, and while these are still entertaining, zombie flicks originated with voodoo. It’s nice to see filmmakers digging back to the origin of a genre.

We meet our band of slightly heroic teenagers doing ordinary teenage things, most notably preparing for the end of school disco and coping with the idea of forming new relationships under the watchful eye of some rather strict parents. Think of it like Romeo & Juliet. Actually, the build up to the zombie bits are straight up influenced by the Bard with an equally tragic end for one of the characters. Distraught over her son’s choice, his mother uses a Voodoo text to bring him back to life. Only the book had been damaged. Her spell, partially completed, didn’t resurrect him, but brought him back as a zombie. Whoops!

Parents, magic is never the answer when learning how to cope with the loss of your child. Please observe safe magical practices. (The more you know…)

After this point the Voodoo portion of things is murky and the spell is passed on via the main character biting a classmate, who just happens to be a right jerk and deserved what he got. There are a few characters in this film that will make you to cheer when their fate is decided. This is in part to the script. Though I did find a few flaws with the way things were written. At one point it felt like they forgot the magic element and decided to go the gory, Saw route.

Despite that, don’t think the gore wasn’t entertaining. If anything, stick through to the end to see the most horrific use of a tractor this zombie has ever witnessed.

I’m going to give Boy Eats Girl 3 ½ bites out of five. If some of the characters had been utilized better (what was up with the priest guy?), it’d be a solid 4, maybe even a 4 ½. Watch this flick for a fun, teen zombie movie and to get a dose of blood and guts. Don’t watch expecting any in-depth look into how humanity works during the Zombiepocalypse. Some movies are just for the fun of it.

From Jimmy Star: Anthony Guajardo is a young American actor most famous for his role as Miguel in the hit AMC original television series The Walking Dead. Guajardo guest stars in the Vatos episode opposite leads Andrew Lincoln, Norman Reedus, and Steven Yeun who hold him hostage as part of a quarrel with another group of survivors.

In addition to The Walking Dead, at his young age, Anthony Guajardo has already appeared in the film The Adventures of Sharkboy and Lavagirl 3-D and shot a national commercial campaign with AAA. Along with acting, Anthony is exploring the behind the scenes of the entertainment industry as a production assistant for Calliope Talent.