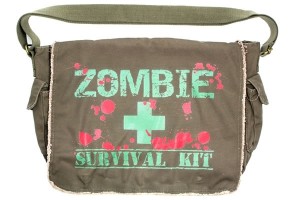 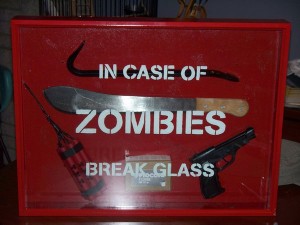 Okay, the zombies are up. They’re shambling, they’re walking, they’re doing the Thriller dance and they’re hungry. You just spotted one on your front lawn. What now? If you’ve thought this out or even considered the possibility of this day arriving, you should be ready.

We at the ZSC talk a lot about preparation in the sense of stocking up supplies, getting your go bag together, choosing your weapons and other required survival needs. Being prepared is the only real defense any of us have, so here’s 10 things you should know to ensure survival, or at least a fighting chance during the Z-pocalypse.

The number one most important thing you could ever possibly do is make your personal Go Bag and never let it out of your sight or put it beyond your reach. We’ve talked about preparation so much it’s running the risk of being repetitive, but the importance of preparing ahead of time cannot be overstated. Food, water, medical supplies, weapons, duct tape… it can be a long and sometimes overdetailed list. No matter how hard we try to think of everything in advance, nobody can plan for everything but we can learn to expect the unexpected. Prepared survival kits can be purchased online or put together manually to suit your preferences.

Have a network. Get everyone who matters to you on speed dial or prepared email/text message and make contact at the first sign of trouble. Let them know you’re okay, plan a meeting point or at least tell them where you are going.  You won’t be able to rely on communications staying open as things go from bad to worse, so be sure do it early. A CB radio is also a good investment, one that can be taken with you either in a vehicle or on foot. 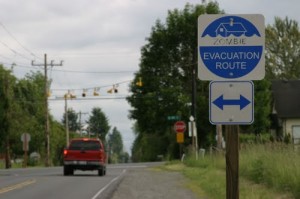 Okay, you’ve got the car packed up with all your survival gear and supplies. The gas tank is full, you’ve called your mom and told her you’re coming to get her, the CB radio is on and you’re armed to the teeth.  So, where are you going? How are you getting there? Is there a mandatory evacuation that ensures all major roads will be jammed and completely impassable? Traffic alerts? Mass panic on the streets? Looting, robbery and general lawlessness? Chances are the answer is yes, so you need to know exactly where to go and the best way to get there before it all goes bad. You can’t pick up or rescue anyone if you’re stuck in traffic.

Whether you’re driving to get Mom or on foot running for the hills, try to avoid congested areas. Stick to back roads or side routes that are likely to be less populated. Arriving at your pre-planned destination is the first step of survival.  Be sure to also have a backup destination in mind, a plan B, even a plan C if possible.  The ZSC has an always-growing list of Resupply Stations and Rendezvous Points to help you get to where you should be when it all starts to go down. Even if you find yourself caught unprepared (which would never happen to any ZSC member), you can head straight to the nearest supply station or rendezvous point to get what you need and/or meet up with fellow survivors.

Even if you plan to be holed up somewhere indoors, secure and protected from nature’s elements, there’s a good chance you might have to eventually abandon your comfortable safe haven and literally run for the hills. It’s not a bad idea to brush up on basic survival skills now, before the dead start walking. 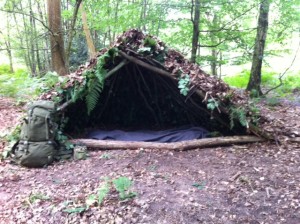 Take a course in outdoor/wilderness survival. Learn to build shelter, protect yourself from the elements, hunt and fish. Okay, you don’t have to be the great white hunter of the North, but learning to trap small game such as rabbits and squirrels or pull a fish out of the water means you get more than berries for dinner if and when the food supplies run down.

Learn to build a fire . Humans have enjoyed the ability to make fire for ten thousand years, give or take. But in the modern era of convenience, many of us would be lost with nothing but two sticks to rub together. A minor detail such as the lack of matches or butane lighter can be the difference between life or death in the colder places of the world. Fire also provides light, security and helps make that fish taste a little bit better.

Even in the best case scenario where the Z-poc never begins, it’s a smart move to know what to do in today’s world of random unhappy accidents. Take a first aid course. Anyone can put on a bandaid, but when the world stops working and there’s nobody to call when someone is injured or sick it’s up to you to take care of them, or yourself. Learn which medical supplies to grab and how to use them, how to treat poison ivy rashes and bee stings, which medications to stock up on and which to throw away… what you don’t know in the world of first aid certainly could hurt you. Also, be sure to get a good first aid reference book and stash it in your go bag. 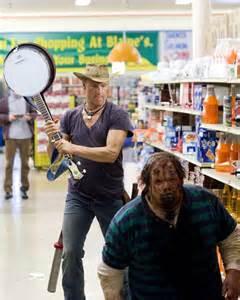 Are you going to need weapons during the z-pocalypse? Most definitely, yes. But this does NOT mean you should plan to run out and raid a gun store the second it hits. Not only because everybody else will probably be thinking the same thing, but do you know how to handle a gun? If you don’t, the chances of you shooting yourself in the foot or mortally wounding a living person are a lot higher than your chances of making a successful zombie kill at any distance. This isn’t a movie. Picking up a weapon does not instantly turn you into Jason Bourne. If you’re going to carry a firearm, make sure you know how to use it. Visit a local firing range and have a look around. Many offer instructional courses or can point you in the right direction, and they won’t laugh at you (much) if you shoot like a girl. Learn how to clean and properly care for your guns, too. A poorly-maintained weapon is not the way you want to face the zombie apocalypse.

Many people don’t like firing guns. We’re not going to tell you get over it and learn to do it anyway, but rather think about the importance of being able to effectively defend yourself and your loved ones against the shambling horde. Your weapon of choice should be the weapon you are most comfortable with, and can handle confidently without supervision. Sometimes a solid wooden baseball bat is enough to save you from becoming a meal. Blunt weapons don’t require ammunition, you don’t need extensive target practice and they’re certainly easier to find. Machetes and other edged weapons make a bigger mess, but have the same advantages and may even require less physical work than a bat. Many outdoor survival classes offer bow hunting instruction, which would give you the opportunity to learn to kill two birds with one stone, so to speak.

7. Know What You’re Up Against 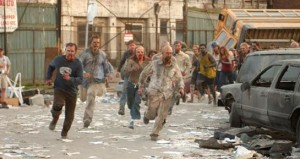 Don’t underestimate the dead. Yes, at first glance zombies appear to be pretty easy to avoid. They’re slow (sometimes), not very smart (always), and in small numbers pretty easy to avoid (usually).  But it’s important to remember that their strength is numbers and chances are at some point they will outnumber you. If you find yourself face to face with certain death with little or no means of escape, you have to know what it takes to put your undead attacker down for good.

Read books – Among many other well-written and admittedly entertaining how-to survival manuals, Max Brooks’ Zombie Survival Guide is a must-have for any household of future survivors. Ten years from now the battered, dog-eared copy of your favorite survival manual found in the bottom of your go bag might just be the answer to everything.

Movies – Zombie flicks are entertaining and fun, but sometimes they can be a good source of information. Also what not to do can be just as important as any to-do list you can find out there. It’s better that the hindsight came from watching a movie rather than figuring it out for yourself later.

One important note – Don’t set them on fire. It’s quite a spectacle on film, but the reality may not be what you hoped for. Not only is it likely to be the worst smell you could ever imagine, but do you really want a flailing, stinking, flesh-eating fireball chasing you down the street?

Isolation is dangerous. You need someone to watch your back. As the living population dwindles, your chances of survival are higher if you are part of a group rather than alone. But you also need to know your companions. Are they your friends, family or random strangers you met while picking through the remains of a looted Wal-Mart? It’s a tough choice to make. Anyone can learn to survive, but holding onto your humanity in the process can be harder than you might think. 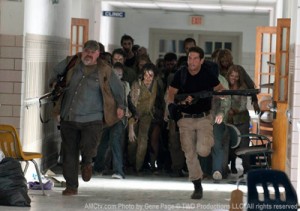 Disasters can bring out the best of humanity, but also the worst. Some people will only want to be your friend as long as you are useful to them, or because you have more stuff than they do.  Be prepared to protect yourself, your loved ones and your stuff.  You should trust strangers only as far as you think you could throw them, and always assume that someone you don’t know might not hesitate to trip you to get away.

Don’t go to the mall. Not ever. We don’t care how many movies you’ve seen, malls have too many entrances and exits, and too many potential zombies inside. It’s a very bad choice. The only reason to go to the mall is to hit the bookstore to grab the aforementioned reference books. But you should already have these at this point, as well as copies of Undead is not an Option  and  Undead Uncensored in your go bag. 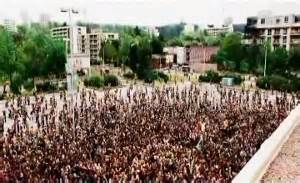 Don’t get yourself cornered. If you’re heading to the roof, be sure to have a secured way down. Most zombies can manage stairs or even a fire escape. If they know you’re up there they will find a way to get to you. Even if they don’t, you’re risking turning yourself into the proverbial cat in a tree. A siege situation is not one you want to be in during the Z-pocalypse.

Lock doors behind you. Stay off the booze and drugs. Don’t drive like a stockcar racer (unless you are one). Don’t jump from one rooftop to another. Don’t play “tag the zombie” to amuse yourself. Avoid shaky tree branches. If it smells like it’s spoiled, don’t eat it. Don’t consume any wild-growing berries or plants if you don’t know what they are. Don’t drink water from rivers or lakes without boiling or purifying.

Just think. Use your head. Don’t make rash decisions or take unnecessary risks. All the planning in the world is useless if you get yourself (or someone else) killed.

10. Be Prepared for Failure

If you find you’ve accidentally selected Plan D for Dumbass and all of your carefully thought out preparations have fallen apart, abandon ship. Run. Everyone makes mistakes. Don’t beat yourself up over it. Don’t dally around trying to analyze what went wrong and don’t worry about trying to fix it, just grab your go bag and run. You can make a new plan later.