Three months after Meat Cute blew up, Liv is still persona non grata when it comes to visiting her family. She gives it another try, anyway, hoping time healed her brother’s mental anguish over her refusal to donate blood. Yeah, no. He’s still holding tight to that grudge, telling Liv, “Go away. Don’t come back.” Which is pretty much the same thing their mother says before Liv walks into Evan’s hospital room. They aren’t the only ones with a bone to pick when it comes to Liv’s recent behavior, Major has her in the doghouse since the moment she turned him without permission. Hey, she gave you the last dose of the cure, dude. Show a little respect. 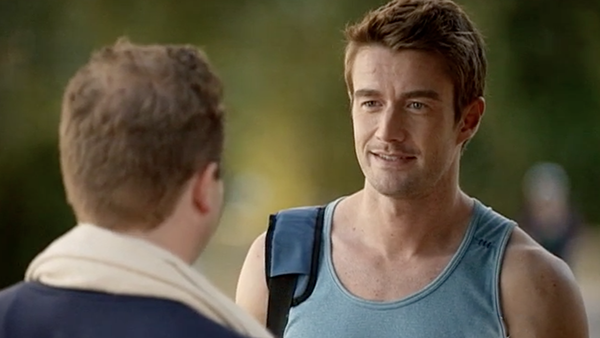 Speaking of the cure, it may not be one-hundred percent effective. At least, that’s what Ravi alludes to as he laments the lack of tainted Utopium necessary to replicate the cure so he can actually test it. Final Hope, a.k.a. New Hope, is the only rat left from the experiments. It’s doing well considering at one point it craved burrowing into other tiny furry heads to munch brains. However, the rat is terrified of Liv. Turns out, it’s not just the rat with zombie-senses similar to Spider-Man’s spidey-sense. Major shows a similar side-effect. Anytime he’s near a zombie, as is the case when he meets a new personal training client, the hair on the back of his neck stands on end. The cure turns former zombies into zombie-detectors. Handy skill to stay alive. It could also be put to use for other nefarious purposes. More on that later. 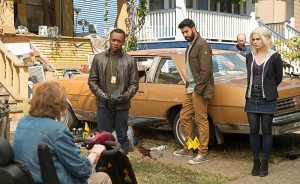 Ready to meet our first corpse for the season? Wendell Gale is a peach of a man. A rotten peach. He’s old, grumpy, and quite the racist bastard. Which essentially makes everyone living in a mile radius from his house a suspect. It also means Liv is unbearable in this episode. At one point Clive is so fed up with the rubbish she spews, he looks ready to punch her. The personality is wishy-washy. It’s like the writers realized they went too far and held back during certain scenes. But then they went Full Bigot at times, too. Personally, I would’ve nixed the racist personality. Yes, we get it, old folks love to hate what they don’t understand. Did they necessarily need to manifest this in the form of intense racism? No. They didn’t. It was a lazy way to write a grumpy old man and give them a wider suspect pool to play with. Half-baked detective work and a couple insignificant visions narrow the suspects down to three people—Wendell’s sister-in-law Clara, the neighborhood bad-boy Rodney, and neighbor Byron Thistlewaite. The case itself is pretty straightforward once Liv finally has a clear vision starring Byron’s darling dog. Wendell, notorious for yelling at Byron about where his dog dropped its dung, locked the mutt in his shed to teach his neighbor a lesson—leash laws aren’t a joke and curb your dog. Instead of having a civil conversation, Byron jumped to conclusions after a little ribbing from Wendell and kicked the carjack out from under the car Wendell had crawled under to work on. The car killed the old man. A distraught Byron heard his dog in the shed and rescued it. Now he has a safe dog in need of a new home since he’s going to jail for murder. Congratulations, idiot.

When Liv isn’t being mostly useless in the investigation, she’s tracking down her favorite person in the world, Blaine. She needs his past connections to score more tainted Utopium. But it looks like she’s hit a dead end. Blaine is a legitimate businessman, shilling funerals to his fellow humans. Okay, he’s still selling brains, as well. Can’t change a tiger’s stripes. Which is why it’s no surprise that Blaine is setting himself up to be the largest Utopium dealer in the city. He still doesn’t know who cut the batch he sold at the boat party where Liv was turned, though. Given a new mission, Blaine tracks down Don E—pothead and former stooge—to ask who cut the Utopium from the party.

If they’re going to make a cure, it needs to be soon. Vaughn Du Clark is a desperate man. The revelations about Max Rager and its weird side-effects put a dent in their sales numbers. He has a plan. A nefarious plan. First, get Super Max on the shelves. Doesn’t matter if the side-effects still happen. They have an ace-in-the-hole. Someone with the ability to find zombies. Yep, you guessed right. Du Clark calls Major into his office and lays out his plan. Major will take the list of known zombies, venture out into the world, and murder the undead. That was his original plan, after all, so why change? The problem? Du Clark lists Liv as his number-one enemy. To pacify his new boss, Major take out his newest client/zombie. Maybe that’ll keep Du Clark off his back for a while.

It won’t keep Du Clark’s assistant from playing double agent. Gilda is making herself at home in Liv’s apartment, posing as her new roommate since Peyton bolted after Liv killed a zombie in their kitchen. Gilda is the reason Major is locked in his new position as zombie slayer. She bugged Liv’s phone. How much more chaos can she cause before Liv finds out about Gilda’s connection to Max Rager? Plenty.

A slow start to season two. The twists and turns come in fits and starts. Unlike season one, they laid the groundwork for the overall season story line early—a luxury they didn’t have before when the bulk of the show’s time was spent simply explaining the universe. With that mess out of the way, I expect more from the show. Will they shake off the sophomore curse? We’ll see.