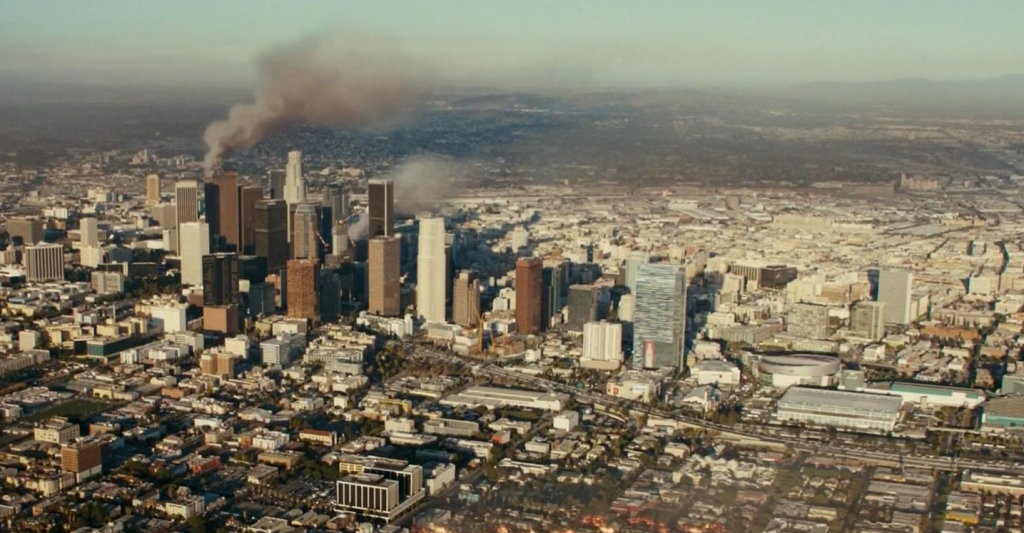 Slow your roll. This review contains spoilers. Are you ready?
The family is finally back on track with their original plan—pack everything they need and drive out to the desert to wait out the worst. That last part is hysterical. They’re not paying attention to what’s going on around them. Travis is convinced the government will find a way to fix the infected. Daniel is far more practical. He knows it’s “us versus them.” Which them, though? The infected and their mindless search for sustenance? The soldiers imprisoning them in the Safe Zone? The government doctors kidnapping anyone and everyone with symptoms of illness, both physical and mental? For Daniel, it doesn’t matter so long as he and Ofelia survive. The only reason he stays with Travis and Madison is because they’re heading to the medical facility to retrieve Liza and Nick. He won’t leave the city without Griselda. Daniel’s practicality demands they kill Adams so he doesn’t alert the remaining soldiers in the city. There’s an argument, of course. Travis wins the round, with an assist from cold-hearted Madison, and they take Adams along to provide a map for the military compound housing Exner’s clinic.

Except then the bleeding-heart lets Adams go. Why? Because Adams whines endlessly about being tortured. Cry me a river. Going from what we saw on-screen, Daniel gave him a couple paper cuts. This is why it was vital they establish the torture on-screen in episode five. Without it, the story line with Adams falls flat and makes no sense later on when Adams catches up with the group to confront Daniel. Why go back for revenge? Adams wasn’t permanently harmed. His wounds were entirely superficial. He showed no genuine mental anguish during or after the lackluster torture scenes. It’s another case of the writers drumming up tension without actually establishing any. 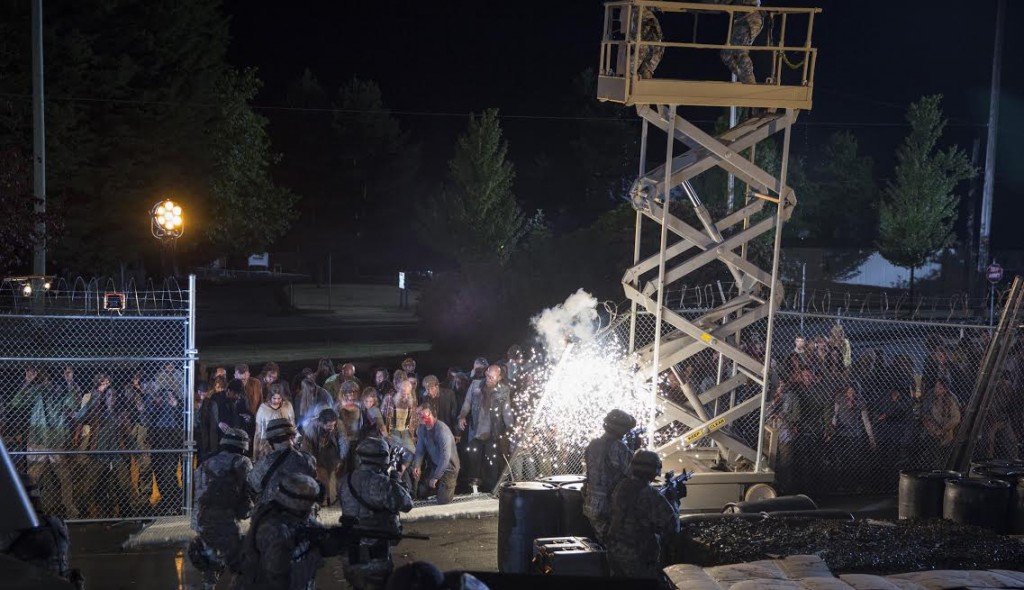 Not even the massive wave of infected in the second half of the episode manages to make an impression. As part of the plan to sneak into the military compound, Daniel utilizes the stadium overflowing with infected to distract the soldiers. There’s the usual footage starring clueless men shooting through a chain link fence. All the actual hand-to-teeth action is seen through Liza’s eyes as she’s preparing to evacuate with the clinic staff. In slow motion. While she stands still for two and a half minutes—I timed it—doing not a bloody thing. There are times for realism; any person faced with a zombie horde would freeze. However, with an already snail-paced first season and copious slow-mo shots, this was a bad call by the production crew. There’s no sense of urgency from the characters. They’re watching dozens die at the hands of people they assumed were just sick. Yet they stand around, twiddling their thumbs. Even when Liza discovers that Exner murdered the clinic patients who couldn’t be transported—the helicopter evacuation team tucks tail after discovering the infected horde—her reaction is, “Oh. Well, they’re dead. You, the woman who killed them, should come with my family.”

A lot of questionable behavior by the survivors gets swept under the rug. One exchange cannot be overlooked. While Travis, Madison, Daniel, and Ofelia are in the compound searching for their kidnapped family members, Chris and Alicia wait with the cars in an underground garage. Once the feces hits the fan, some of the soldiers tuck tail and run. A few find the kids and demand they hand over the keys to the SUV. Alicia and Chris fight back as best as they can. Then one of the soldiers stops and threatens to rape Alicia. This is not okay anymore. I’m tired of every man on TV with questionable morals resorting to rape in order to prove they’re not the good guys. Quite frankly, it’s lazy and predictable. Plus, it makes no sense. “Oh, we’re being chased by zombies? Let me stop and try to rape this chick.” Yeah, no. That’s simply not how the flight-or-fight trigger works. These men feared for their lives, not their libidos. Stopping to grab a little action before securing their safety goes against human nature. Writers, leave the rape threats on the cutting room floor. Surely as a group we’ve all moved past this bad-guy trope. 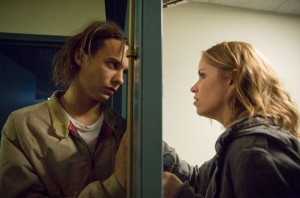 What about Nick? Well, he’s still got a friend in Strand—the well-dressed man he shares a cell with in the clinic. They break out after it’s obvious the soldiers are fleeing. Do they help anyone else? No. It’s another nail in Nick’s likeability coffin and doesn’t do a thing to make us find common footing with Strand. They’re sitting ducks in the compound, soldiers or not. The guy they needed to get a ride to freedom is somebody’s dinner. Then they walk the wrong way down a hallway with an automatically locking door. Luckily Liza happens to find them, and the others trying to save them, and unlocks the door. As reward for the assist, Strand takes them to his oceanfront property. They’re not staying in the gorgeous house. Strand is a nomad at heart. He knows setting up camp is a death sentence.

There’s business to take care of before they can leave the house for the yacht floating just off the coast. First, Ofelia has a bullet wound from Adams’ attempt at revenge. It’s not clear where, exactly, she is injured, just that it isn’t likely to kill her. Second, their only trained medical person was bitten in the rush to escape via a detour through the military compound’s kitchen. Liza takes a walk down to the beach. Nosey Madison follows. Turnabout is fair play in the apocalypse, spurring Liza to ask Madison to kill her before she turns—a talk which went the other way around about the time the Safe Zone was established. It takes so long for this talk, Travis finds the women. He ends up putting Liza down, despite both women agreeing it’d do irreparable damage to his fragile psyche. The episode ends with another drawn out set of slow-motion shots ranging from Travis’ anguished lament in the surf to Chris discovering his mother’s body. 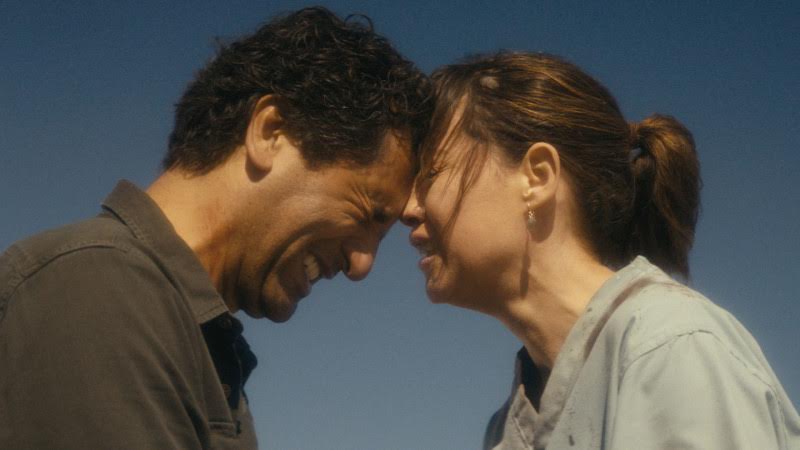 That’s it. There’s no momentum catapulting these characters into season two. It’s inexcusable. They knew well in advance that FtWD would have a second season. It wasn’t like they wrote season one completely blind to the show’s future, as so many infant series do nowadays with fickle audiences and wary network executives. The Walking Dead franchise is more or less all AMC focuses on as their cash cow. So why end this show in particular in such a boring way? Yes, they kill a main character. Yes, it should be tragic. But it isn’t. Liza isn’t given enough screen time to make fans like her enough to mourn. The slow-motion ending drags down the tempo and Travis’ breakdown in the surf is almost parody. I do not have high hopes for season two. If this show sees a third season, it’s simply because AMC is milking this cow until the teats run dry, then putting it out of its misery.