His position doesn’t thrill Madison at all. She’s playing single mom with five extra people to feed and clean up after. Liza can’t help; she’s the only one tending to the injured and sick inside the gates. But what does Travis do all day? Hang around the main gate, waiting for Moyers to need him? Which is exactly what happens after Moyers announces that there is a six-mile buffer between the fence and the nearest infected person. The officer needs Travis’ smooth-talking skills to convince Doug to submit to medical testing. He does the job, only to later find out Doug broke curfew and was taken away to a medical facility. 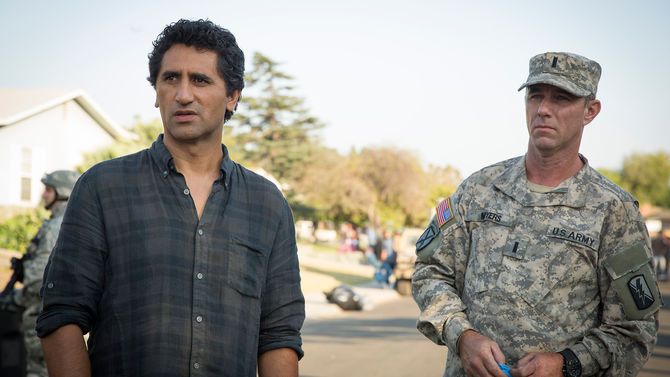 Whoa, whoa, whoa. There’s spoilers in this review. You sure you’re ready to read it?

Travis exposed Doug’s mental instability. Anyone not normal and one-hundred percent functional isn’t welcome in Moyers’ safe zone. Is Travis putting the same hyper-focus on his kid? Nope. Chris tells Travis there may be survivors on the hillside outside the fence after spotting someone using a mirror to send a distress signal. It isn’t until Madison hears about the discovery and talks to Travis about it that he brings it up to Moyers. But like Doug, his attempts to make things better backfire. The episode ends with Travis sitting on the house’s roof, watching muzzle flare light up the window where Chris spotted the S.O.S. signal. Anytime he interferes, people are hurt. 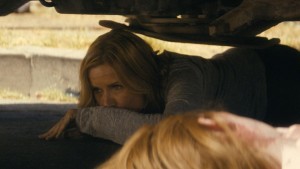 His fiancé isn’t doing much better at keeping her head down to wait out the worst. When Madison is certain Travis won’t do anything about the possible hillside survivors, she breaks out of the fence. Up on the hill, it’s obvious the military have been through there. However, the corpses don’t look right. Madison is nearly spotted by a patrol unit and crawls under a car to hide. It puts her face-to-face with a dead woman. That’s when it dawns on her, most of the bodies stinking up the street weren’t infected. The military mowed through them and moved on, leaving them to rot. At least Madison took some form of action, though she never found the house with the survivors. When the episode opens, she’s more concerned with painting the family room again because she can still see the blood stains from when Daniel saved Travis. She has this delusion that they can host an open house to sell the place. Yeah, like the fickle market will survive a zombie apocalypse. It can’t even handle a drought. Meanwhile, she’s so tense, she’s dropping the ball on her Nick Watch. Like most unrepentant junkies, he found a way to score morphine—stealing it from the men next door with congestive heart failure. Hell rains down on Nick when Madison does find out. She beats him, leaving him with a black eye and a boatload of embarrassment. As for Alicia? Other than breaking into Susan’s house and giving herself a tattoo, she might as well not be in the episode. 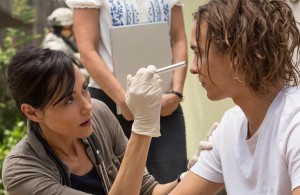 The main action is actually with Liza. The military finally brings in a doctor to evaluate the sick and injured in the safe zone. Dr. Exner’s first order of business is to call Liza on her lie; she’s not actually a nurse. However, Liza’s quick thinking and natural compassion are commended. Exner asks Liza to help her visit everyone in the safe zone in need of medical attention. They eventually circle around to the Clark house. Griselda will need surgery to save her foot. Daniel plans to leave with her. Next, they corner Nick to see if he needs help weening off the junk. Exner sees through his lies, but doesn’t make a fuss. Later that night the soldiers come for Griselda. Before they make it out the door, the switch is flipped. They’re not taking Daniel. Instead they want Nick. He’s caught and handcuffed. Madison is beside herself, blaming Liza. Nick and Griselda aren’t the only ones who leave that night. Exner more or less begs Liza to join her to help these people. After mouthing, “I love you,” to Chris, Liza climbs into the transport vehicle. She may be going to help others, but for the most part I believe she’s going to keep an eye on Nick for Madison.

Daniel is written as the Wise Old Man. It’s annoying. He more or less predicts what happens before Griselda and Nick are taken, ruining the surprise. Sure, he has a cool story to tell, but is it necessary in every episode? We get it. They want to draw parallels to other refugee camps. Having Daniel present is enough without giving him these endless monologues. It’s like they’re telling the story twice per episode. Fans aren’t that dense. Quit guiding them by the nose.

Where did they take Nick? Do we really care? I don’t. But we’ll likely see this mysterious medical facility in the next episode.