Evolution:
Review for The Walking Dead 908
by R.C. Murphy

Listen hard, folks. You can hear spoilers on the wind. And in this review.

At long last we’re getting a look at the Whisperers. They’ve tormented Rosita and Eugene for several episodes now, but it’s impossible to know where, exactly, the voices are coming from when they’re surrounded by walkers and any of the undead could be a wolf in sheep’s clothing. It’s easy to underestimate the Whisperers based on weird premise alone. But the show wastes no time proving how deadly this new threat can be. What’s the one resource available in seemingly endless quantities in the zombie apocalypse? The undead. Whoever finds a way to tap into that resource and make it work for them, not against them, may just be the ones to survive to see if there is a way to ever truly recover civilization from what seems to be the end. 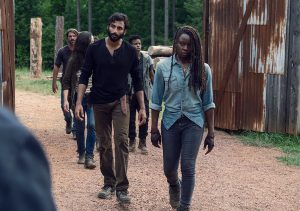 Given how well the Whisperers control the walker hordes in this episode alone, they’re well on their way to becoming the only ones to see if there’s really a future for any of them.

While Daryl, Aaron, and Jesus work on a way to keep one step ahead of what they think are nothing but erratic walker hordes, Michonne and the new arrivals make it to Hilltop’s gate. It’s a cold greeting from every last citizen. Guess Alexandria isn’t the only community to institute harsher security techniques. Hilltop all but rolls up the driveway when a scout spots the incoming visitors. Inside, things don’t warm up much. Everyone keeps Michonne at arm’s length, and the newcomers are told to sit and wait for Jesus to return. Even Carol is a tad standoffish with her long-time friend. She gives Connie a warmer greeting, going so far as to use her very basic ASL (American Sign Language) skills to introduce herself. Are they all mourning still and unable to face Rick’s widow or has Michonne’s retreat into Alexandria cut her off from the few emotional support outlets she has left? 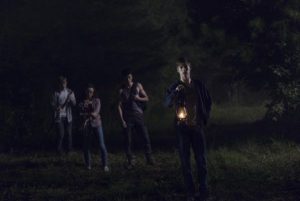 Someone who needs to build himself a support system sooner rather than later is Henry. He’s not finding his rhythm at the blacksmith shop just yet. His dreams of Enid waiting around for him to grow chin hairs are dashed upon learning she’s dating Alden. There’s only a handful of kids his age in Hilltop. And, unfortunately, they’re typical teenagers. Just once, I’d like a production team to show that teens can hang out without giving themselves alcohol poisoning and abusing others, but guess I’ll have to wait. Henry, of course, winds up in trouble for his drunken night out after puking on Tara’s boots. His fate is likewise left in Jesus’ hands.

Too late for the rescue team, Rosita wakes from her exhausted sleep to warn the others that there’s serious danger outside, not just commonplace walkers. The rescuers get the same message a few hours later after sunset when a trembling Eugene fills them in on the horde which has made several passes by the barn to look for him. Jesus and the guys brush it off. There’s no way Eugene saw the same horde two or three times in the same day unless he went looking for it, right? Wrong. Daryl learns this the hard way when he completely fails to draw the horde away with fire crackers and Dog’s barking. He has no time at all to catch up with the guys, who are cornered and trying to find a way around or through a stone and iron fence. 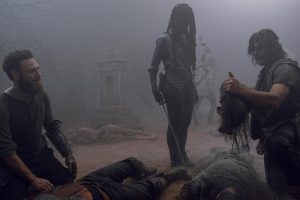 The final scenes with the Whisperers remind us that TWD is indeed a horror show. While it’s a tad annoying to lose so much of the action in fog, the suspense going into the fights saves them from being boring. Jesus’ murder does lack something. I’m not quite sure it hit the right emotional note. Instead this just feels like TWD burying more gays after making sure the characters don’t do anything remotely gay for two seasons.

TWD is taking its customary winter break for the rest of 2018. We will catch up with our favorite survivors, and learn how they plan to deal with Alpha, Beta, and the other Whisperers, on February 10th.