A New Beginning:
Review for The Walking Dead 901
by R.C. Murphy

You know the drill. There’s a ton of spoilers in this review, so proceed accordingly.

Despite the show being back on the air during its normal time frame, it feels like we were away from Rick and the gang for way too long. Or maybe it’s just that 2018 feels like 10 years packed in a single year’s box, held together with cheap packing tape. The Walking Dead gives fans a good way to vanish from the real world for a little while, as it always has. But did the production team manage to grab the waning attention of fans burnt out by the exhausting All Out War story line?

I’m honestly not sure this premiere is strong enough on its own to do that, and it’s a little worrying considering what all we know for sure is coming down the pipeline as far as actor departures from the show. 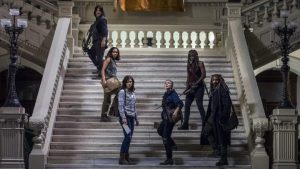 The bulk of this episode deals with an idea the producers introduced at SDCC this summer: Reclaiming old technology in order to ensure a future for their communities. In the opening montage, it’s clear that Sanctuary’s corn crop failed. The factory’s dirt is sour. All they can do with the produce is turn it into biofuel, and the yield isn’t nearly enough to keep everyone driving out to source supplies to fully replenish Negan’s former home sweet home nearly 2 years after the war ended. To speed up the process of healing the ground, they need a better, faster way to plow. There’s also a few other things they need, so everyone’s off to Washington D.C. to raid the Smithsonian. Makes perfect sense. How many scouting teams would’ve had the time or energy to take things like covered wagons before now? Aside from some minor walker damage, everything in the museum is intact.

The plan to get it all out, not so much. 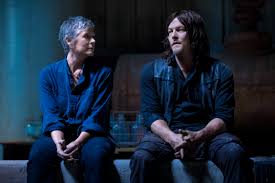 This episode, like so many before it, is plagued with basic logic errors so great, one cannot help but yell at the television. There’s a vast difference in writing a tense scene in which a beloved character has a close call, and writing a series of foolish calls that are obviously wrong while still (still!) presenting the person giving the orders as the best possible leader for these people. This problem continues into the next set of problems while getting their loot home. How on earth did they create this relay network, yet when it comes to actually planning and executing what should be a moderately easy mission, they do things like fail to make sure all the bridges are secure? The latter oversight cost Ken his life. Always know your exits. It’s a basic lesson all women, police, and military learn. 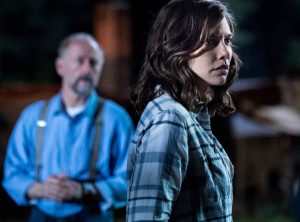 Perhaps it’s because of all the bad calls that the power struggle is more pronounced this season. The first problem comes from everyone’s need to put an outside in charge of Sanctuary to keep the dissidents in line. Daryl wants out. Being in the building triggers his PTSD, but he stops just shy of admitting as much to Rick. Carol, however, hears and understands why Daryl needs to get away from there. Not sure she’s going to have much better luck, not with guys like Justin lurking on the fringes with his passive aggressive quips, and the constant reminders that someone in the community actively wants Negan back. The second problem comes to light curtesy of the unchecked, crumbling bridge. Turns out Hilltop has it good. Really good. They’re flush with people, produce, and ideas. And for this entire time, they’ve been loaning out supplies right and left to keep everyone afloat. Yet everyone defers to Rick. He gets the praise. Maggie, in a moment I wish to frame and mount on a wall, point-blank tells Rick that the power dynamic will change because she knows her worth, and that of the people under her care. Rick, to his credit, acknowledges it and doesn’t seem all that torn up to have a little pushback. The third problem is proof that Maggie needs the spine of steel we saw in her conversation with Rick because someone’s out for her head. I’ll give you one guess who it is. Gregory was never going to let the election results stand, and Maggie should have known he’d take a funeral as a chance to plot against her. In another show of power, Maggie hangs Gregory in the middle of town using one of the most painful methods ever. It’d take a brave fool to go toe to toe with her anytime soon.

A quick note to wrap up . . . . Can we have a spin-off romantic comedy with Carol and Ezekiel? Seriously, all I want is to see these two happily joking with each other until the end of time. No cameos. No walkers. Just a blissful couple in an empty world being adorable. It’s been a rough year. We deserve this one nice thing.