Here at the Zombie Survival Crew, we’re not ALL about zombies. Sure, we make sure we are sufficiently prepared for the zombie apocalypse, but we’re also open to preparing against all types of potential horror scenarios. I have nightmares about furry creatures rising up and overrunning the command center. And then when I awake, I realize it is partially true, Commander Murphy’s obsession with those freakin’ bunnies makes me wonder whether we’ll ever be a fur-free environment again. But today we have invited Sadie Hart to talk about bad guys and villains (and we certainly know a few of those *cough* UGA *cough*). And Sadie knows what she’s talking about—she works with a serial killer on a regular basis&#8230and one that shape-shifts as well.

Sadie has also been gracious enough to offer an ebook and swag pack to the winner at this stop of her tour.

I know we have a few wolf fans in the crew, starting with our very own Yellow Brigade Commander, Jinxie G, so for the contest, answer this question in the comments: If you had a werewolf stalking you on one side and a horde of zombies shambling your way on the other, how would you escape? The winner will be selected based on the creativity of the answer. Show your commanders you are ready to rock ‘n’ roll come the Z-poc. And now Sadie, take it away: 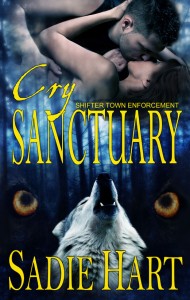 The bad guy in a story can be one of the most complicated characters in a book, and in my opinion, they should be. Then again, I’m not a big fan of the ‘purely evil’ bad guy. I like motive. Sure, a killer went on a rampage and killed fourteen people…but why? Why did he or she kill them in that way, what about the victims drove the murderer to pick them, what in their past made them who they are? Of course, I might have watched one too many Criminal Minds episodes to drive this obsession of mine, but I find those types of characters the most believable.

But more than that…I find them to be the most relatable. Understandable. And that’s always really difficult for me as a writer, trying to understand why someone could kill or harm another person. Ever heard the saying, “A villain should be the hero of his own story”? In Hounded, the bad guy thought he was saving the world in a sense. He was saving everyone from the ‘monsters’ that had done him wrong. In the end, the killer’s defeat was almost a sad scene. He had loved ones and motives behind his actions.

Even if a villain’s reasons behind his or her actions aren’t the most understandable, there are things that can make them seem more human. The killer in Cry Sanctuary has a dog. He was a very weird character for me to write. The Hunter is a serial killer, he hunts his victims down, and yet, he then goes home and cuddles up to his golden retriever. There were times as I was writing him that I was truly reminded that the Hunter was human. Oh sure, he was a werewolf too, but he was also a person. Which added a chilling element…he’s a guy who could be very normal in day to day society, and yet he’s got quite the body count behind him. Those are the scariest bad guys in my opinion. They’re the ones you never see coming. 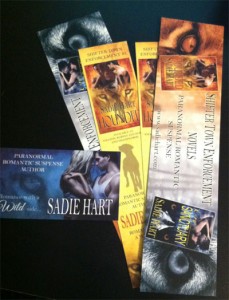 After being held captive at the hands of a serial killer, Holly Lawrence is the only one who’s ever managed to escape the werewolf known as the Hunter. As a Hound for Shifter Town Enforcement, it was her job to track and find the killer; instead another girl died the night that she escaped. Now, the Hunter is changing his game and he has Holly in his crosshairs, all he needs is a good chase.

But when he targets the pack of Sanctuary Falls, alpha werewolf Caine Morgan is determined to protect them–and he’s not the only one. The Hunter is using Sanctuary Falls in a terrifying cat-and-mouse-game as he zeroes in on the one prey that ever got away: Holly. As Holly struggles to stay one step ahead of the Hunter, it’s up to her and Caine to work together to save herself and his pack… 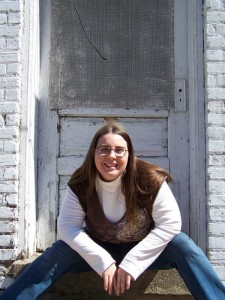 But with the body count rising with every full moon, this killer won’t stop until Holly cries sanctuary….and runs.

During the day, Sadie Hart works as a secretary in a library. At night, she writes steamy, paranormal romances revolving around the things that go bump in the night–both the spooky and the naughty kind. She lives in Michigan with two large dogs, both rescues. She writes the Shifter Town Enforcement series, combining her love of all things animals, the paranormal, and an action packed plot, but she doesn’t plan to stop there.

Thanks to Sadie for stopping by. Be sure to check out her links, and don’t forget to comment.