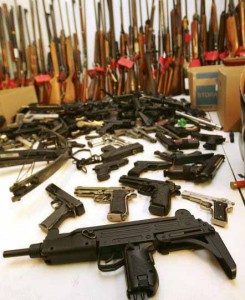 At the ZSC we are all about preparedness. With that in mind we have compiled a list of weapons that will be helpful when the undead rise.

Zombies are pack animals, much like hyenas. If you find yourself surrounded toss a grenade into the crowd and run like hell. For more strategic use, lay out claymore mines. These use a remote detonator, keeping you out of harms way. Explosives are very handy. However, we do not suggest flinging a vial of nitroglycerin at the zombies. That’s just asking for trouble…

Should you be faced with a magical (voodoo) zombie, the easiest and best way to deal with them is with salt (or salt water). Magic practitioners use salt as a cleansing and protective agent. In the case of zombies, you need to pelt them with it, or put it in their mouth to break the connection with their creator. Salt water works easiest for this. Squirt guns, anyone?

This weapon has a short, sharp blade that makes it easy to wield. Put enough strength behind a blow with a machete and it should cut deep enough to destroy a zombie’s brain. If not, aim for the neck then stomp on the zombie’s head when it hits the dirt.

Research shows that this is one of the most effective weapons in Left 4 Dead 2. The lightweight blade is razor sharp and cuts through zombie skulls like butter. A note on swords: lightweight blades are made for stabbing and cutting. Heavier broadswords are made to slash and bludgeon. For zombie-slaying purposes we recommend a lighter Asian-style blade.

9. Whatever is lying around

Inevitably you will find yourself without a weapon. Look around to see what you can find. Ideal “junk” weapons are lead pipes, 2x4s, a crowbar… anything with some weight to it will crack a zombie’s skull on the first or second swing.

Who doesn’t dream of wading into a crowd of zombies with a chainsaw in hand? Okay, maybe some don’t, but here at the ZSC we encourage thoughts like that. Ash in The Evil Dead series showed just how useful a chainsaw can be. We’re not suggesting it as a replacement for your hand, though.

One of the best ways to incapacitate a zombie is to bash its skull in. Shaun of the Dead introduced us to the idea of using a cricket bat to do this. The flatter shape gives the wielder more surface area utilize, making it more efficient (and cooler looking) than a baseball bat.

Human bodies react poorly to electricity, dead or alive. Some breeds of zombie may not keel over from a jolt, but it will incapacitate them long enough for you to damage the brain. In Land of the Dead they used electric fences to keep the undead out of the city. Snipers picked off zombies once they were caught in the fence.

5. A go-go dancer with machinegun leg

This weapon might be a tad hard to obtain. However, if you do find someone like Cherry Darling from Planet Terror cherish her ability to hike a leg and take out the hoard of zombies on your tail.

Unless you want to burn down your Safe Haven, we suggest using this weapon strictly outdoors. Zombies disposed of via fire will wander around until their brains are ignited. This makes them a fire hazard. Know your environment. Don’t use a flamethrower near a gas station or propane tank.

Slightly heavier than a sword, the ax is all business when it comes to zombie slaying. The heavy blade will do all of the work for you and easily cleave a zombie’s head in twain.

In instances where stealth is necessary, we suggest using a crossbow or compound bow. The walkers in The Walking Dead were drawn by sound, making this weapon a must. The other benefit of a bow is that the arrows can be retrieved and reused. Bullets and explosives lack this handy feature.

Last, but certainly not least, we recommend a simple shotgun. Few weapons will do the amount of damage as one blast from a shotgun. The weight of the weapon also makes it an ideal bludgeoning tool if the zombies get too close. This is your boomstick, use it and live to see another sunrise.