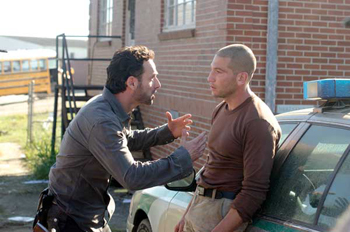 Well, no one can complain about the lack of walker action in the newest episode of The Walking Dead. I’ve seen enough leaking skulls to satisfy my bloodlust for another couple of weeks, so long as the writer’s promise to quit trying to make me cry. More on that later. We’re diving straight into the heart of this episode with Rick, Shane, and the showdown we’ve been waiting two seasons to see.

After Lori planted the seeds of doubt in Rick’s mind last week, it was only a matter of time before he took things to the source. Did anyone else get a mental image of Lori as a demon whispering in his ear? Creepy as heck. Anyways… Being Mr. Honorable, Rick took Shane out for a nice long drive and confronted him away from everyone else to give him a fair chance to say his piece. He gets it—understands that Shane loves Lori as a representation of life and love in his world of death. But he also knows his friend, sees that he’s dangling one foot over the edge of the Cliff of No Return. The amount of restraint shown by both men in that scene resolved none of the tension between them. We knew they’d have more to say about it, and boy did they.

One of the problems that’s sprouted up in this post-apocalyptic universe is the notion that your everyday Joe can, with the proper application of force and smarts, become God. Who gets to decide which of the living are fit to survive? Certainly not Shane, who goes into every decision gun first. At least Rick makes an effort to think things through. But is he any more fit to make that choice for someone else? Are any of us? In their shoes, I would have left Randall there. If he was determined enough to walk the eighteen plus miles to invade the camp, then I’d deal with it. Rich and Shane’s differing opinions boiled over, giving them an excuse to vent physically what neither man could cope with emotionally. I wonder what Lori will say when she learns what all her whispering caused. She nearly lost both of them.

Before we move to the really heavy subject that’s unavoidable thanks to this episode, I want to yet again theorize over what Jenner said to Rick before the CDC blew up. When they inspected the deputy walkers, Shane seemed at a loss for how they turned without being bitten. Rick, however knew that a scratch could change them. Has this happened before? I can’t remember. But it seems that the virus that reanimates the dead is adapting. Perhaps Jenner knew this would happen and warned Rick.

At the beginning of season two the writers touched on the issue of suicide. For Andrea, it seemed to be the only way to cope with her losses and escape an inevitable painful demise by walker. Dale took it upon himself to keep her from it. Daryl talked some sense into her, in his own way—with help from an unfortunate walker that’d hung himself before turning. Now they’ve circled back around to that issue with Beth, Hershel’s youngest daughter. Just like Andrea, her decision was taken away. Was Lori right to stop her? Do the same rules about suicide persist after death has thrown the rest of the rules to the wind?

Maggie tries like heck to make Beth see what losing her would do to the rest of the family. But she is so determined to take the easy path that she tries to convince Maggie to do it with her. Desperation makes a person’s mind search for the “easy button”. Suicide isn’t the way, though. Trying to make a pact with your loved ones to do the same is forcing them to follow the wrong path in their life.

Andrea and Lori have very different views about how to survive. Lori wants stability, to bury her head and do what she can to pretend there aren’t walkers outside. Andrea is trying to adapt, but for her survival isn’t worth it unless she is the one calling the shots. She went behind the “alpha” female’s back and gave Beth the opportunity to do as she wished. Actions like that come with a price. One that everyone involved has to pay.

Next week promises to be equally as tense. What will happen to the outsider, Randall? Chime in with your predictions in the comments.