Completely Unhinged
Review of “The Walking Dead” 414 – “The Grove” 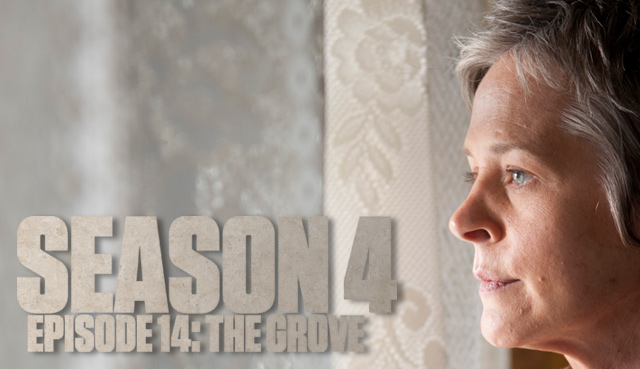 Have you recovered yet? We sure as heck haven’t. This week “The Walking Dead” pulled no emotional punches. They went there and didn’t bat an eyelash. Unfortunately “there” may have been a little too far for some of the younger actors involved. A lot was asked of them and it didn’t quiet . . . work. Some of the intensely emotional scenes failed to fully grab the audience and jerk them into the moment. Melissa McBride delivered a stellar performance in this episode. One of her best in the series. She succeeded where others couldn’t handle it and pulled the audience deeper into the heart-wrenching events of the episode. One woman cannot make a show, though. Certainly not a show built on a solid ensemble cast during the early seasons. The longer the show sticks to intimate cast sizes per episode, the more drawn out and god-awfully slow it feels. Not good for TWD fans who came to the party expecting copious amounts of brain-bashing action.

What are we going to do this week, Brain? Same thing we do every week, Pinky. Post TWD spoilers. 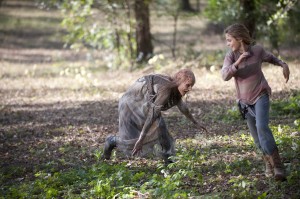 It is no secret that Lizzie is completely unglued. Her grasp on her own mortality and the real danger the walkers pose to her safety was never solid. In this episode, it becomes painfully clear that she’s always been slightly off. Little Mika has obviously spent ample time learning how to distract her sister from whatever isn’t right in her head. We have no name for what’s wrong with Lizzie. She’s convinced the walkers are simply an evolved version of ourselves. They speak to her. Demand she take care of them and provide food. Somewhere along the way, being undead became an appealing prospect. Was this a way to cope with the losses her family faced since the walkers started shuffling around? Hard to tell now that we know she wasn’t all there to begin with.

Dealing with mental illness after the healthcare system has fallen to the wayside along with the government, sewer maintenance, water stations, etc., can’t be easy. Many suffering from mental health problems rely on medicine to recalibrate the chemicals in their brains. Others need the calming effects of a regulated schedule, which often includes regular visits with a mental health professional of some sort. None of the methods used to treat problems like Lizzie’s are available to her. Mika does her best, calming her sister while providing insight to the adults who’ve taken care of them since their father’s death. Did daddy dearest know how far gone his eldest daughter was before the flu claimed him? We didn’t see much, if anything, about the girls until his passing. Would Lizzie have snapped so completely if their father had been the one to take them from the prison instead of Tyreese and Carol?

Carol has tried so hard to become cold, calculating, and pragmatic since losing Sophia. She killed Karen and David, only showing remorse when it came time to confess to Rick and then, in this episode, Tyreese. The remorse came because Carol knew she’d betrayed their trust. She fully believed killing Karen and David would prevent the spread of a disease the prison population had no hope of fighting off on their own without medicine and a team of doctors. They were necessary deaths. Something she did for the better of everyone. Carol knows there’s people surviving in their new world who are only making it because of others. Sophia, as Carol put it, “Didn’t have a mean bone in her body.” Killing to survive was well beyond her comfort levels. Mika is the same way, despite Carol’s attempts to toughen her up.

Too bad her lessons didn’t stick. 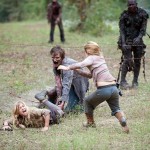 Lizzie’s madness cost her sister her life. Is anyone to blame? No. Nevertheless, Carol’s guilt nearly cripples her, makes her hesitate to do the necessary thing. Is death ever necessary? In our world, no. Murder is senseless. Unnatural to the teachings of the numerous world religions which are the cornerstone of our morals. But in a world where every day is a fight to take just one more breath, one must weigh the good of the many against the individual. Carol and Tyreese were faced with that decision—try to save Lizzie, despite the depth of her mental illness or ensure Judith’s safety, as well as their own. In the end, Carol’s ruthless practicality stepped in and allowed her to make the hard decision. Lizzie had to die. No matter how they arranged it, someone would end up alone with her and Lizzie’s inclination to turn everyone into a walker would get the best of her, and them. What if Lizzie ran off and some do-gooder brought her into their camp? Nothing good could’ve come from her continuing to live unmedicated and unchecked by her sister’s kind soul.

In order for the show to catch their audience again, they need to pick up the pace. There’s only two episodes left in season four and the entire second half of the season has been spent backtracking. Why? They brought too many characters in too quickly during the prison days. None of the new survivors who walked away from the prison attack got much screen time, giving viewers a group of strangers to follow who they had no connection to. While yes, it’s good to get to know a character, it’s too little too late this long after the characters have been introduced. All the character development slowed down the pace of the show. It’s become “The Lord of the Rings,” with every single character’s progress no more than walking a few miles. Are they growing emotionally? Yes. Has anything really happened since the prison fight? Can’t say it has. We’ve got a budding fan-service relationship, two dead kids, and a lot of people walking on train tracks after six episodes. Not to mention two new groups of survivors who will likely get the same lack-of-development treatment as the others. The entire first season was only six episodes and look what they accomplished there.

Will everyone meet at Terminus by the end of season four? Let us know what you think in the comments below.