We put out the call for local information on resupply stations, and the Zombie Survival Crew continues to respond. Information is coming in and we’re sifting through and compiling everything for communication to the loyalists. We started with information on South Central Resupply site Midland, TX thanks to Purple Brigade member, Kris O’Dell, continued with Wilmington, DE compliments of ZSC Yellow Brigade member Brian McCabe, and now move forward with Blue Brigade member Jenni Womick.

Kissimmee, FL—Most people would say Disney right off the bat! But, is this where you want to be during the zombie invasion? I don’t think so! I don’t even want to think of the Magic Kingdom under those circumstances!

I chose Trinity School for Blue Brigade-Phase 1 Resupply station. The school is located on West Vine Street in Kissimmee, FL.  West Vine is also known as US Highway 192, and Irlo Bronson Highway depending where on the road you are located. This is the main road in Kissimmee. It actually runs through a good portion of the middle of the state to the Atlantic Ocean. So, the school is easily accessible. 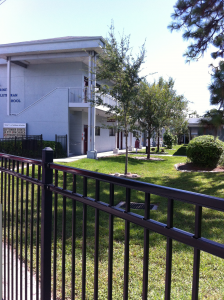 The school, is actually on a little campus that consists of several buildings, all of which are already fenced in. The school building is an older, two-story building that resembles an old motel. There are stairwells at both ends of the building, and an elevator (if power was on) in the middle. There are public restrooms in the middle on both stories. There are limited windows, and they are high up. Each classroom has an outside door, and a door inside that links it with the room next to it. There are also restrooms between the classrooms, and sinks in each room. 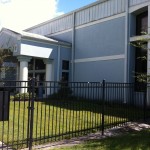 The other main building is the Family Life Center. This is a gym, with a large kitchen, restrooms with showers, and two other rooms that could serve many uses. There are very few windows, and the majority are very high up. 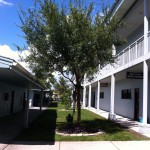 The other buildings on the campus are a church. There are restrooms, and other rooms and some offices here. Again, few windows. There is a another long building across from the school that has offices, a lounge and storage. There is also a fellowship hall that has a second large kitchen and an area for meeting. There are 2 small storage sheds, and in the very back of the campus there is an old house that now serves as day care-with a 3rd kitchen in it. 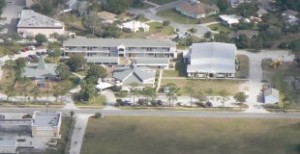 Since the entire campus is already fenced in, it would be not to difficult to fortify it and make it stronger. The aerial picture shows the entire area, but it’s old so there are no fences. The fences were added about 3 years ago.

For supplies, the school is in a perfect location. Directly across the street is a WalMart, and some other random stores (including a comic book store-study material for zombie killing). Next to that plaza (kiddie corner across the street to the right) is a Target and a Home Depot. Next to the school on the right there is a Play It Again Sports, and next to it on the left is a gas station. And, for the adventurous ones, a K-Mart and Big Lots about 2 blocks away.

Also, less than 1 mile away is the Kissimmee Gateway Airport. This is a “small” plane airport (no commercial planes). If any of the planes were flyable, this could be a HUGE asset.