Talk about a slow simmer building to an explosion. This week’s episode was paced just right, giving viewers enough walker action to keep their hearts racing while simultaneously messing with their heads. Was anyone else uncomfortable watching this episode? In the Command Center, we all scooted up to the edge of our seats—except Juliette because, duct tape.

Warning: There’s spoilers down here. And they float. Oh yes they do.

Sanity seems to have a different meaning in a post-apocalyptic world with zombies on the loose. Statements we’d consider absolutely off-the-walls make some odd sort of sense. Most of the time. However, when Carol’s protege, Lizzie, talks about wanting to die so she can change and come back to life, it still sounds absolutely insane. Her conviction is on par with Hershel when we first met him. Only, with a child’s innocence, she’ll wind up dead and gnawing off her sister’s face if someone doesn’t intervene. 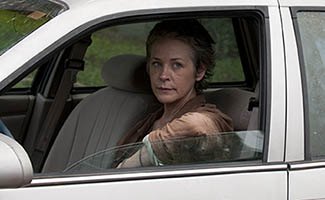 Carol could be that someone. Only, she’s lost her parental drive. Sure, she’ll keep someone safe and make sure they can protect themselves, but the love she carried for Sophia, the love that allowed her to leave the quarry camp in season one after her husband was eaten, is long gone. Buried alongside the daughter she refuses to acknowledge anymore. Why? Because when she found Sophia, it wasn’t her daughter any more. Her daughter died in the woods, not in front of that barn. She’d been holding onto the ghost of her child and now, when all of Carol’s gut-wrenching decisions are changing the way she approaches their messed up world, she can’t open her heart to anyone else. Should anyone look up to her as a mentor? Probably. Carol’s spine is made of the purest steel, forged in the heat of Ed’s abuse long before walkers were even heard of. But steel is cold, unforgiving. She’s relied on that strength for too long. It’s changed her in ways Rick can’t fathom. Which is why, when push came to shove, he had to let her go. Carol became a liability. His focus has to be on the greater good. Once word got out that one of the council members turned murderer, it’d be chaos amongst the healthy population of the prison survivors. For a while Rick relied on Carol’s love to keep the group going. When it turned into ice cold calculation and execution, she forced his hand. And she didn’t fight it. Carol knows she made him turn her out. She’s sane enough to accept responsibility for the murders. But not enough to feel remorse. Something snapped in her mind, sending her to sociopath land. The same happened to the Governor when his walker-daughter was put down. Would Carol go that far into madness?

We’ve known for a while that Michonne is not a social person. She has a handful of people she trusts and comes back to the prison just for them. We see the longing to belong in her eyes more and more as she helps the prison crew on runs. Her talks with Daryl over the last two episodes have given more insight into what makes the two most skilled fighters tick. Oddly enough, the social outcast managed to make her see that she has a home, she just never stays put long enough to feel the love everyone can provide her with. She chooses to be alone, no one forces it on her. Could this be the end of Michonne’s solitude? Possibly. It will take a while to see if being around people makes her antisocial tendencies rear their ugly head. It’s a self-defense strategy. If she doesn’t connect with someone, when they die it doesn’t hurt her. She’s gotta be tired of hurting herself by pulling away from everyone, though.

Tyrese’s head is still not on straight. He went on the mission to grab meds in order to help his sister and honor his dead girlfriend. Only in the new episode did viewers realize, he’d planned for the trip to the vet school to be a one-way suicide mission. He climbed into the car fully aware that he wouldn’t come back. He’d pour everything into killing walkers. And he has. Can the others pull him back from the ledge? There’s no way for Tyrese to get closure. Not with Carol gone. It’s unclear if Rick plans to ever tell the big man who was really the one to light the match and burn those two. And what would he do, then? Hunt Carol down like Michonne hunted the Governor? He would. In the state of mind he’s in, he’d be fully capable of finding her and killing her, with no concern about his personal safety. That’s terrifying. You can’t depend on someone who has nothing to live for. 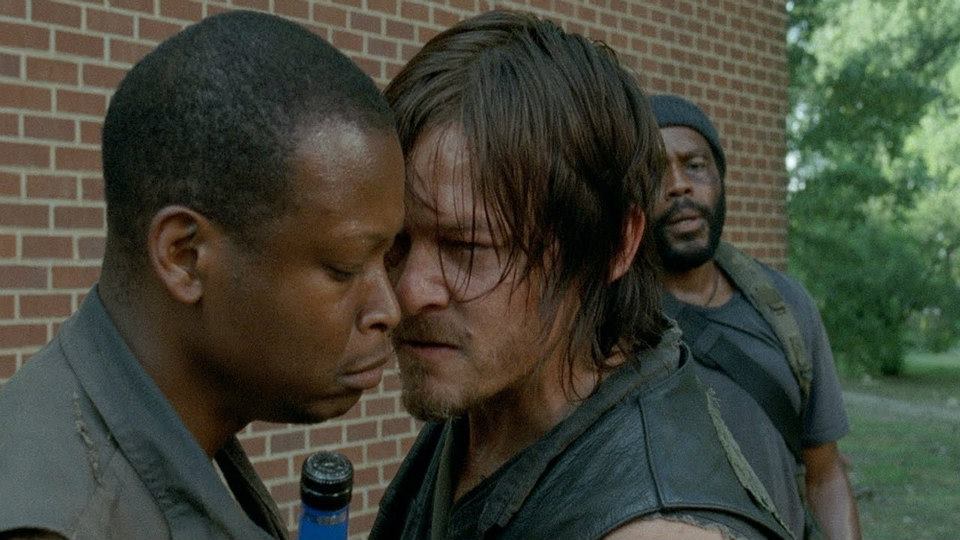 Bits and pieces of Daryl’s past keep coming up to haunt him. He takes it personally when Bob attempts to fall off the wagon. Why? Because he grew up in a family of addicts. Merle being the worst of them all because while he was rarely around, when he did make an appearance, it was to make his little brother’s life hell. Seeing Bob willfully harm himself and risk their safety because of an addiction set Daryl off. He takes personal responsibility for each and every person he brings into the prison. He holds them to a high standard because he’s choosing to trust them, to make them a part of his family. For someone who went their entire life without, family is important. It is why Daryl gives everything he has to help Rick, to cover the other man’s ass when his sanity took a field trip to the aquarium. Family is why Daryl consistently reminds Michonne that she has a home with them. She doesn’t need to go out looking for fulfillment if she’d just stay put and let the love he’s nurturing in the prison to calm her. Daryl is all heart. He just doesn’t show it in traditional ways.

Do you think we’ll be seeing Carol again? How far can she make it on her own? Let us know what you think.