First, adding unnecessary time to the pilot, killing what little momentum was in the episode with slow pans of Los Angeles, false zombie sightings, and sandpaper smooth character development. The latter is a huge deal-breaker for fans. They need a character to latch onto and love as a friend. I’d hoped the second episode would be better without the luxury of extra time to futz around, forcing it to focus on the plot. Yeah, not so much. All they managed was to make a bigger mess of the characters. Then, they continuously used slow-mo shots to try and ramp the tension throughout the episode. Except after an incredibly snail paced pilot, starting the second episode with a quiet slow-mo shot of Alicia walking down the street is the exact opposite of what they needed to do to catch fan’s interest again. 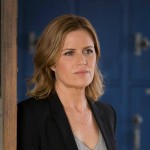 The writers for this show can only write one female stereotype—the strong, independent woman who doesn’t need to listen to anyone, let alone a man, in order to keep her family safe. Madison was locked into this trap from the get-go. In this second episode, Liza is crammed into the same mold—vehemently refusing to deal with Travis even though the tone in his voice when he calls her to warn her about the strange happenings in L.A. says something is seriously wrong. Automatically, she jumps down his throat, much like Madison when he attempted to tell her there was something wrong in the church where Nick got his fix. Alicia does nearly the same thing after visiting her boyfriend Matt, only to discover he’s so sick, he should be in the hospital. Madison warns Alicia to back away, afraid Matt will turn into whatever Cal was before Nick ran him over twice. “People are getting sick. It could be contagious.” Predictably, Alicia fights her mother. “If he has it, I have it.” While it provided a great throwback to the harsh secret Edwin Jenner told Rick Grimes before the CDC building exploded on TWD, it makes no logical sense for Alicia to completely dismiss her mother’s concerns. At no point does she stop to actually process what is going on. The women all give into knee-jerk reactions, simply to create tension. It makes them all one-dimensional, dull, and predictable. Even Madison’s emotional breakdown near the episode’s end is telegraphed. Strong, independent women always cry when alone. Then when someone catches them, they brush it off. Yawn.

So what actually happened in episode two? Travis and Madison concoct a fool-proof plan: gather their kids, his ex as well, and drive out to the desert to wait out whatever is going on. Oh and detox Captain Addict. First, find Alicia. A task hindered by overworked cell phone towers and her stubbornness, as mentioned earlier. After they spend far too long arguing whether or not it’s safe to be around Matt, he finally sends Alicia away. This time she listens. Travis drops everyone off at home and heads out to pick up Chris and Liza. Chris dodges Travis’ calls like a professional disgruntled child. While he’s busy with his metaphorical fingers in his ears, Chris winds up smack dab in the middle of ground Zero for another officer-versus-undead shooting. The public doesn’t understand why the officers unloaded their magazines into the homeless man. 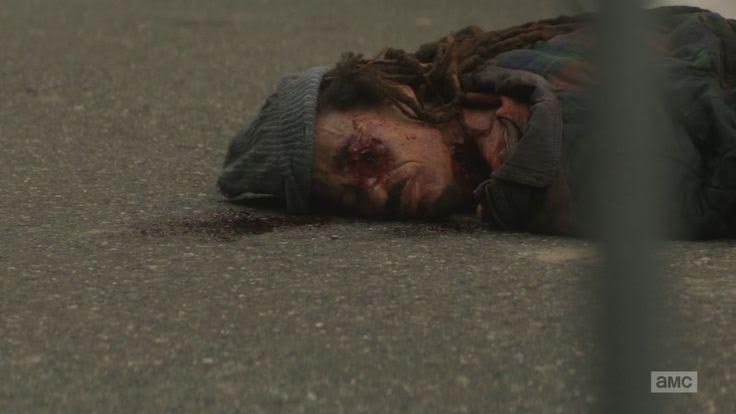 In a scene reminiscent of the 1992 L.A. riots, the crowd demands an explanation. Chris films the altercation, which only incites the protestors as they defend his right to film the police who tell him to stop. By the time Travis deals with Liza’s unreasonable refusal to listen to his warnings and they track down Chris, the riot is in full swing. An infected woman shuffles toward a female officer and is shot twice. The second she hits the ground, pure chaos erupts. Travis and Liza grab Chris. They run until the riot is too much to navigate, eventually begging for shelter in a barber shop owned by Daniel Salazar. His wife Griselda is the one who makes the final decision to provide a safe place for the family. Daniel’s daughter, Ofelia, is also there. The episode ends with them still trapped inside the barber shop while outside, the rioters blow up vehicles and loot shops which haven’t been locked up. Back at home, Madison is desperate to score meds to wean Nick off heroine. She leaves him with Alicia to break into the nurse’s office at the school, where she scores enough OxyContin to do the job. Hopefully. As she’s ready to leave, Tobias suddenly appears—never mind that he doesn’t have keys to the school or a reason to be there, really. But since he warned Madison about the outbreak, she relents and gives him back his knife. Oh and helps his steal food. Because that’s what good guidance counselors do, right? Sure. They also hand out drugs and encourage kids to have unprotected sex—my disbelief crash-landed the second she willingly committed a crime with the kid. Tobias and Madison aren’t alone. 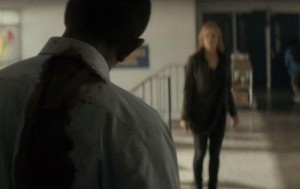 Artie, the school’s principal, has a new, fresh look. He shambles after them. Stupidly, Madison tries to help and is attacked for her efforts. Her big, bad protector doesn’t so much as make Artie flinch with his itty bitty knife. When the infected principal turns on Tobias, Madison rescues her rescuer by bashing her friend’s head in with a fire extinguisher. She takes Tobias home, leaving the food they stole. Because that makes sense. If you want to die from starvation. The episode ends with the family living across the street becoming Infected Chow and Alicia finally demanding to know what’s going on.

The most frustrating thing about this episode is the fact that they more or less present Tobias as an apocalypse expert. He babbles tons of useful survival information. But when it comes to practicing these skills, nothing. Nada. It’s dumb move after dumb move. First, fruitlessly stabbing a man repeatedly in the chest. Second, leaving the food behind. They wrote him as the Harbinger and Encyclopedia, but negate these traits at every turn when Madison doesn’t accept what he’s telling her. The show is written almost as if each character is trapped in their own bubble, utterly incapable of actual interaction with each other. How do they expect fans to root for what should be a cohesive survival unit when the characters have no vested interest in one another? Yes, it’s early in the game, still. However, the season only has six episodes. There’s not much time left to build up the characters from their current two-dimensional caricatures. Without a connection to this family, all the groundwork they’re laying for the apocalypse— the riot scenes were brilliant if one ignores the family story line— is for naught. 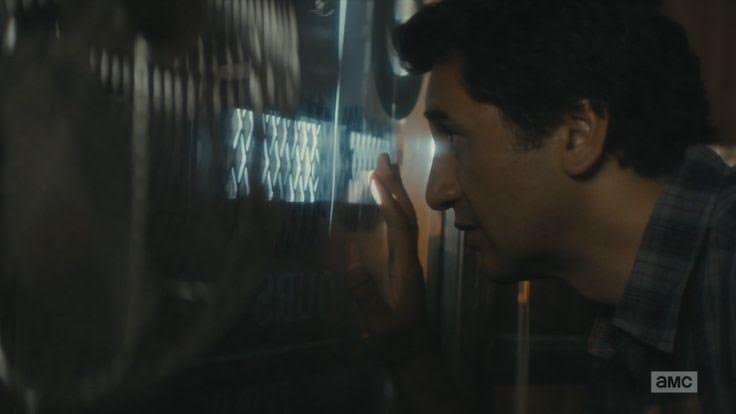