They decided to put huge, radioactive craters in the USA and then went on to write clever ways for the main characters to escape certain death. The only one we knew for sure would walk away was Murphy. Even if he didn’t drive away, something about his changed nature would surely save his hide. Cassandra’s too, now that she’s this mystical Other like Murphy. 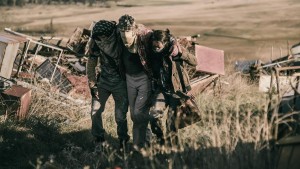 What about the Roberta, 10k, and Doc? Sure, they make it to a vehicle—I’m assuming they steal Dr. Kurian’s SUV since Murphy has the van from the drug warehouse—but a car isn’t fast enough to drive beyond the 3-8 kilometer blast radius. Roberta demonstrates some fancy defensive driving techniques, magically finding a tunnel to drive into to spare them from taking the brunt of the impact once the blast catches up with them. The car flips, leaving the trio in a situation we’re all too accustomed to on this show—carless, no supplies, and hardly in any condition to wander around a desolate wasteland to find provisions which haven’t been irradiated. Especially since Doc has a hole in his shoulder. It’s not clear how long they wander around before Doc’s injury prevents him from going on. 10k stays to nurse Doc. Roberta continues wandering aimlessly. Because that’s smart. Just when she’s ready to give herself Mercy, a little girl screams and it’s time for killin’. The effects for this season are far better for the fight scenes. Like some of Roberta’s other fights, this one is done in stylized slow-motion, where each fatal strike is full speed, but everything else is nice and slow. It gives great detail for the zombie makeup and fight choreography. It also distracts one from remembering that Roberta is actually too weak to walk, let alone take out half a dozen zombies. Smart. The girl’s family takes Roberta in for a while, feeds her, and sends her back out with food and water to find the guys. 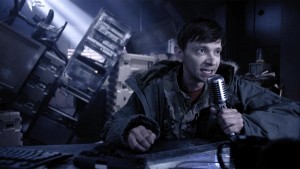 Mack and Addy are back. The band of sister-wives was decimated after one boy they sent to his certain death grew wise and returned to torch the place. Those who didn’t burn alive were eaten by the zombie bear. Only Addy and Murphy’s baby momma, Serena, survive. Mack picks up Addy on his four-wheeler and off they go. Where? Well, looks like they want to rejoin the “Get Murphy to California” parade. The pair, not a couple anymore given the angsty tension in their solo scenes, find a cell phone tower and set up a signal for the others. They aren’t alone for long. Zombies find them and decide it’s lunchtime. Luckily 10k and Doc just happen to be in the same junkyard. Most of the gang is back together again. Using information Addy gleans from a radio broadcast in Spanish, they head out, picking up Roberta on the way. It’s amazing how these people find each other so easily. I can’t even find my friends in a parking lot if we’re separated while hunting old ladies for dinner.

That just leaves Murphy and Cassandra on their own. Murphy heads to the nearest town. He promptly breaks into a vintage clothing store for a lot of therapeutic shopping. The undead locals are pretty friendly, lending a hand to carry his new wardrobe. Cassandra, on the other hand, has to claw her way out of the crater which was the lab before she tracks down the man who ensured she survived the apocalypse no matter what. She’s a tad feral by the time they meet up in the clothing store. Which is the only way to explain why Cassandra allows Murphy to dress her in gold spandex and a white mink coat. While Murphy plays dress-up, his name is being spread amongst the survivors in the US like wildfire. 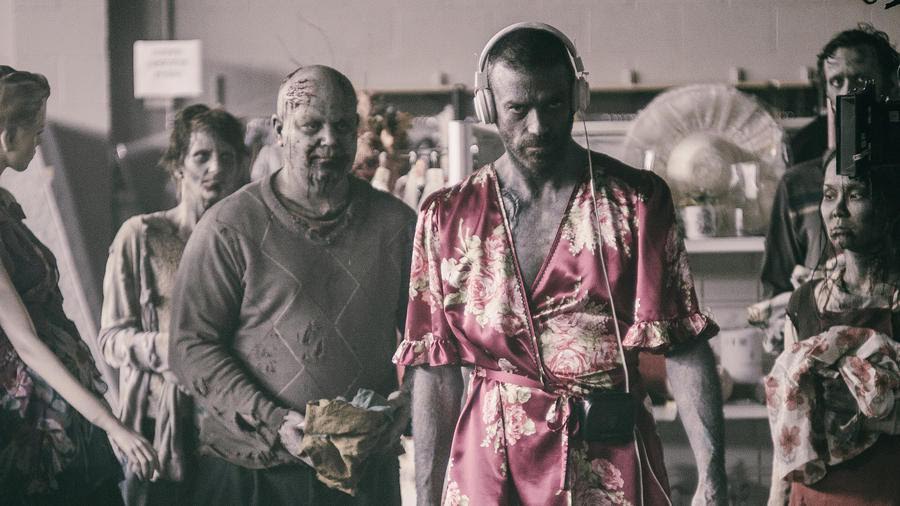 Citizen Z—trapped in the NSA’s computer room after a nuke defrosted zombies in the downed airplane from the pilot episode—sends out an all-call to find Murphy and get him to California, going so far as to lie about a bounty and promising first crack at the refined cure once it’s finished. Which is exactly what Addy hears on the radio. The Spanish message she heard is a response, telling survivors to head to the speed-bump sized town where Murphy and Cassandra are holed up in a strip club. Like you expected Murphy to go anywhere else.

The gang catches up with them, and more than a few other people looking for The Murphy. There’s some witty bantering, a zombie strip show, and a gunfight with a gentleman who’s so, so certain he’ll be the one to drive away with Murphy tucked safely in his trunk. Don’t skip the fight’s conclusion. The final zombie death is . . . unique, to say the least.

With everyone in the USA looking for Murphy, the show’s cleverly turned everything on its head even more than when they decided to nuke everything. Instead of relying on internal drama and the occasional accidental run-in with unsavory survivors, the fight is coming to them. Or Murphy, rather. However, Roberta has no plans to abandon the mission now. They’re close to California. Now all they gotta do is beat everyone else to claim the prize.