The Morgue
Review for Ash vs Evil Dead 202
By A. Zombie 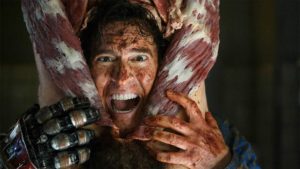 The team is all about divide and conquer. They don’t trust Ruby further than Pablo can throw her, which is about a foot. So he stays behind to grill her about the freaky hallucinations he’s had since popping out her hellspawn. Turns out they’re precognitive visions, but only Ruby can translate the jumbled mess vomited into Pablo’s mind through his connection to the book. According to her, the misbehaving hellbrats want to wake daddy dearest, Baal. Judging from the ferocity of Pablo’s vision, the guy is the worst of the worst. Because that’s just what Ash needs when he’s supposed to be retired. 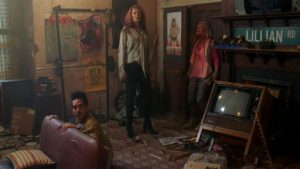 While the gang scrambles to save the world—again—Brock dims the lights and settles in for a romantic night with his current favorite lady. Lillian Pendergrass also happens to be Ash’s ex-lover. Well, technically, she’s an ex-ex-lover. Poor Lillian kicked the bucket and a Deadite took her for a joyride. It finally brings the danger Ash faces daily right into Brock’s living room. The fallout will be astounding with these hard-headed men.

Ash and Kelly are on Necronomicon duty. That’s a really unfortunate phrase.

Field trip to the morgue! All Ash knows is the book is in a body, so he leaves Kelly in the hall to stand guard and tackles the treasure hunt alone. Good thing she’s there, too. Ever-hateful Sheriff Emery is on his way to the morgue, but gladly takes the chance to stop and harass Kelly about the recent unexplained deaths in town. Her patience is gone. The sheriff learns this firsthand. 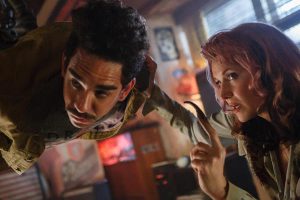 With too many bodies to pick from and no description to work from, Ash reverts to his old ways, using a chainsaw to hack through each body he finds. Should’ve looked, first. The Necromonicon is in the final body, but it’s been there long enough to influence the flesh hiding it. Ash realizes he got the crappy job rather quickly. This scene is by far the most hilarious, graphic, and disgusting gag I’ve seen anyone film. If there was any wonder if this show is okay for children, Ash getting his head rammed up a dead guy’s backside firmly answers the question—no, now quit adding to your kid’s future therapy bill.

The mortifying experience pays off. Ash and Kelly scram, Necronomicon in tow. They almost make it back to Pablo and Ruby without incident . . . then they encounter a couple low-IQ locals with a knack for car theft. Thinking he is smart, Ash hides the book in his car until they discover Ruby’s intentions—only for the car to be stolen while they argue.

Ash can’t catch a break. A bigger bad waits for the door to be unlocked by freaky bald guys. His dad is still a jerk. His companions barely know or trust each other. And the key to saving mankind is in the back of the only thing he actually owns, but it’s in the hands of petty morons. He’s got a long way to go if mankind will survive Baal’s arrival.