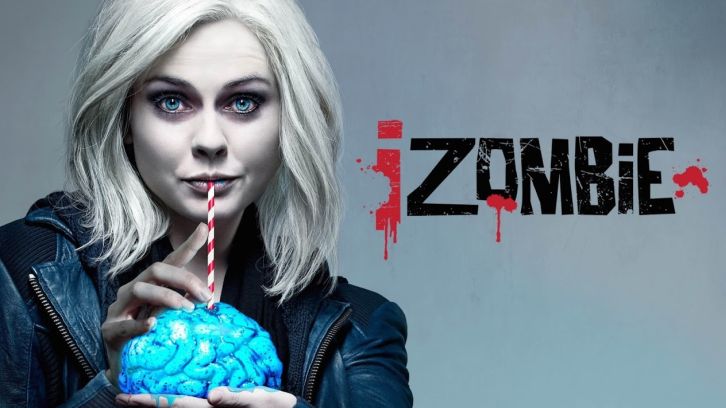 Brainless in Seattle Part II:
Review for iZombie 404
by A. Zombie

Watch out, you may swoon over the episode spoilers below. 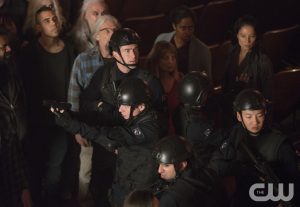 Brother Love’s influence spreads through the downtrodden zombie citizens in Seattle. One man uses his rough encounter with Fillmore-Graves goon Russ Roche as fuel for Angus’ new persona to toss on the smoldering fire within the community. To them, he’s the only to reach out a kind hand since their sudden departure from living society. He feeds them. Picks up their spirits when they’ve resigned themselves to being “dead” to the people they love. Not to mention, he has this uncanny ability to pick a target for his rage and project that onto the masses with a few magnanimous acts to sew the seeds of Us vs Them. Major steps right into this perfect storm on the search for Tucker, the man Gladwell scratched while being recorded. After his friends abandon Tucker, he steals the phone with the video and finds solace in the anger Brother Love preaches. That’s where Major catches up with him. The congregation shout at the Fillmore-Graves employees. Angus uses the moment to praise the Chaos Killer, and issue a stern warning that if Major ever shows his face at church in Fillmore-Graves clothes again, that’ll be his last day having a face. And people think this dude’s a role model. Okay, Sure, Jan.

The Scratching Post crew drops a load of truth bombs in this episode thanks to the brain Blaine and Done E eat in order to find Renegade. The guys use honesty as the best policy, allowing the brain to cough up visions while they operate their businesses almost as usual. There’s a plethora of hilarious throw-away lines from these two. Blaine eventually gets enough information from his illicit snack to find the laundromat where Renegade operates. The calm sanctuary I enjoyed last time is a horror show this episode after Blaine’s guys shoot their way in to grab Mama Leone. Chase Graves doesn’t look too thrilled to be face to face with his supposed nemesis, but it seems like he’ll go through with Blaine’s deal. Wonder how Graves will justify his actions to Mama Leone’s face. 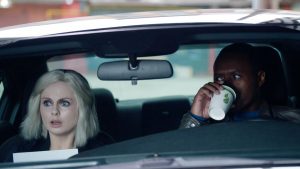 Catching Bruce the coyote takes a lot of patience, a dash of subterfuge, and a large dose of overacting. After several days running a stakeout at the building Bruce uses to torch his victims, Clive and Liv need a new method. Mama Leona, before she’s taken to Fillmore-Graves, tells Liv to try an online ad. Ravi offers himself as the bait, really overworking an upper crust British accent during the video call to set up a meeting with Bruce. The acting doesn’t get better when Ravi waits for Bruce with SWAT, plus Liv and Clive, on standby. Despite the flightiness from the romcom brain, Liv’s passionate about putting Bruce in his place when he claims they have no evidence. I think Mama Leone’s chat about wanting to feel needed after becoming a zombie put some pep back in Liv’s crime-fighting step—that conversation also reminds us how awful Blaine actually is when he’s not oozing charm.

Throughout the various stakeouts and meetings to prepare for catching Bruce, Liv is relentless about talking around Clive’s relationship problem. So much so, Clive snaps at her when she flat out says he should break up with Dale without giving a reason why. It takes the entire episode for Liv to open up about what she saw at The Scratching Post. Turns out Clive and Dale are trying an open relationship, but he’s not keen on hearing the details. Sorry, my man. If you haven’t already heard these details, you’re not in an open relationship, you’re just grasping for a connection that isn’t there. Communication is key, but Clive’s always been a locked door emotionally. It’ll bite him in the ass. 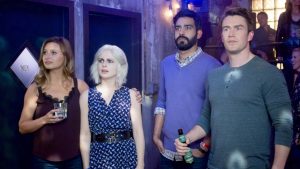 The Great Tim Saga comes to an end. Thankfully. When the gang head to The Scratching Post for the human/zombie mixer night, and Liv’s maybe-date, they must first face off with The Not-yo Man Major Savage. Gladwell and her new partner dose their commanding officer with blue wrestler brain as a joke. It leads to a heartfelt, but laughable scene with Major and Liv having a post-breakup talk about how much they just want to see the other person happy, no matter what. Kudos to the actors for getting through that scene at all. Every time Major opens his mouth, one can’t help but laugh hysterically. With that talk, and several others from Peyton about fate, ringing in her brain, Liv manages to just converse with Tim for the first time since they met. That’s when she finds out he’s a whackadoo Brother Love follower. Good riddance to bad rubbish; she tosses him like a pair of torn pantyhose. The episode wraps with the same sort of fun energy that charmed me during the last episode. We have most of the central cast in one place, hanging out, being silly, dancing, and no one’s worrying about anything. I forgot these characters could laugh so much without their faces cracking. Here’s hoping we get to see more of this, but I’m pretty sure the fun days are gone, what with Team Overlords getting ahold of Renegade and all.