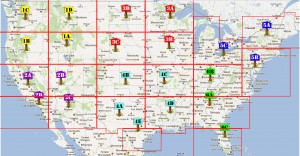 A month ago, we introduced the Grid Concept for our resupply stations, where we broke down the continental United States into 23 Phase I sectors which will roll into 6 Phase II sectors. In order to keep outsiders (walkers or other kinds of predators) from discovering the whereabouts of the resupply stations — because let’s face it, the last thing we want is a surprise visit while gathering the troops — we cannot refer to the resupply stations by city name. And while we have broken them into color-coded groups (North East – Blue, South East – Green, North Central – Red, South Central – Aqua, North West – Yellow, and South West – Purple), we needed a better way to identify the resupply stations without giving away any inkling of the location of the station. So each sector has been given a number and letter to signify its location. This makes it easy for reporting in to the resupply station. If the internet is still an option, check-ins via twitter would be something along the lines of @TheZSC Checking in sector #2D. Travel was quiet. Or if there were problems, they could be reported accordingly. @TheZSC Destination sector #2D. Shamblers enroute, diverting to avoid.

So how are the sectors laid out? Each of the 6 phase II sectors is assigned a number from top to bottom and left to right. Then within each of the groups, the phase II sector will be designated as the A of the group. The alpha sequence then follows a clockwise direction through the remaining locations. For easier visualization, please look at the full-sized version of the map. The breakdown is as follows:**Note** – The colors of the markers are not brigade specific — they are only indicative of the various resupply station groups.

To read more on all resupply stations, please go to our (for members only) Key Links under the Escape Routes/Resupply Stations section 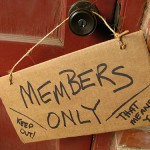 Zombie Survival Crew command has been working on the appropriate strategy for mobilizing the crew in the event of a Zombiepocalypse or other global cataclysmic event. Honorable Brigadier, JL Coburn (SAPPED), has amassed a great amount of data and provided it to the Oracle for her to sift through to come up with the best plan. Don’t be left out in the cold! In order for you to view the escape route plans, you must be registered for this site and logged in. If you are already registered and logged in, you’ll definitely want to check out where your closest resupply station is.