From Walker Murphy as she’s chained to Michonne, along with her furry friend 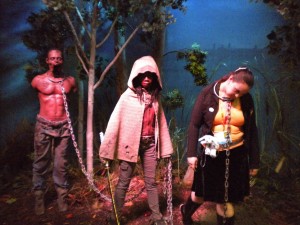 On July 13th, a large portion of The Walking Dead’s cast and executive producers braved the insane crowds at San Diego Comic-Con. They started the day with a signing in the TWD booth (complete with life-like Michonne and walker mannequins). A horde of fans crowded around to get a peek. Yours truly was nearly trampled by some of the fans on the outskirts of the crowd.

In the afternoon, the cast and producers hit the stage in Hall H, SDCC’s largest meeting hall. Even with the upgrade to the larger room, they still could not fit all of the fans inside. People were lining up at 4 AM just to catch a glimpse of our favorite crew of survivors and hopefully hear some good news about season 3.

I won’t keep you guys waiting any longer; here are the important parts from the TWD panel at SDCC.

First off, The Walking Dead will return to our televisions on Sunday, October 14th at 9:00 PM. International fans will be able to watch starting the day after and throughout the following week.

Secondly, they confirmed the first-person-shooter The Walking Dead game from Activision, starring our favorite pair of redneck brothers, Merle and Daryl Dixon. This is our only chance to get more background on the pair. Robert Kirkman said they prefer to not utilize flashbacks to develop character story arcs on the show.

Lastly, this wasn’t announced on the panel, but we just got word that Universal Studios is producing a Walking Dead maze during their gigantic Halloween Horror Nights extravaganza in October at both Universal Studios Hollywood and Orlando. They plan to drop brave souls smack-dab in the middle of some of the iconic and downright terrifying moments from the show, including Rick’s long, lonely walk down the halls of the hospital and the front window display of the department store where walkers broke through to get to the crew in season 1.

Now for some fun tidbits gleaned from the hour-long panel before we share the 4-minute trailer for season 3.

Executive producer, Greg Nicotero says that, this season the zombies will be even more detailed. They’re decaying as time progresses, hungrier than ever, and gathering in droves to go after Rick and his crew. Nicotero also directed an episode (maybe another this season?) of the show, which they finished filming before taking a few days off for SDCC.

May we ever see a musical episode of The Walking Dead? It is highly unlikely. However Laurie Holden and Danai Gurira have taken to mini-musical sessions between scenes on set. Laurie sings and they both dance and laugh. A lot of that chemistry promises to translate to the screen as Andrea and Michonne are separated from the main cast and struggle to keep going in the rough post-apocalyptic word.

Steven Yeun and Lauren Cohan are very excited for everyone to see where their characters’ relationship goes. That is, if Glenn can accept that Maggie loves him no matter what. She will do anything necessary to protect the family she has left and the man she loves. He is finally growing into the man he wants to be, but does that leave room for a love life? And can we say, thank goodness that we’re not in a real Zombiepocalypse? Steven told fans at the panel that he’d only fight to survive if attractive women surrounded him. “If it’s all bros, maybe I’ll lay down and let [the zombies] bite me.”

New cast member, David Morrissey, is excited to join the cast of TWD. He’s a huge fan of the show and jumped at the chance to be involved. David found his home with the cast and crew since they began filming in May and has been pinching himself since then…even if the heat and humidity in Georgia make filming somewhat uncomfortable.

Andrew Lincoln sang the praises of their youngest (and absent) cast member, Chandler Riggs. He says that Chandler, both in and out of character makes decisions far beyond his years and gets to go on this incredible journey. If Andrew could play another character on the show, he’d choose to be Carl so he could go through the experiences that Chandler is. Not to say that Rick’s experiences aren’t thrilling. But Andrew admits that where Rick is mentally is, “driving me bananas.”

There were a lot of fun moments in the SDCC panel discussion for The Walking Dead, but the best moment has to be the amazing 4-minute trailer they played before introducing the cast. Check it out below and let us know which moment you’re looking forward to seeing once The Walking Dead returns on October 14th.