It’s glorious. It’s bloody. Best yet, it’s simplistic. No complicated or contrived tension between the characters. The plot rolls out naturally. Are there parts which don’t make a lick of sense? Of course. This show is written for the most part to parody other shows which take themselves far too seriously at times. But that’s the beauty of this show. It’s not bogged down by things like physics.

Citizen Z is still on the run from the NSA zombies loose in the base. He left Dog alone in the command center with orders to stay no matter what. But where’s Citizen Z going? To the weapons locker, of course. Hilariously, even though he emerges from the storeroom with two full bags of guns, he still relies mostly on a baseball bat to dispatch any zombie in his path on the way back to Dog. 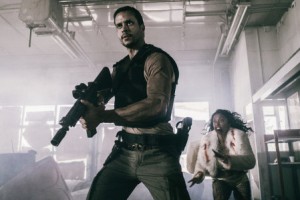 Matters aren’t quite so easy for everyone else. The broadcast from Citizen Z turns the small town in Wyoming into the O.K. Corral. Everyone and their psychotic mother is on the hunt for Murphy. A few factions are in play for this episode. First, the bounty hunter introduced in episode 201, Vasquez. Then there’s the Skull Face guys—who never stand a chance. The instant Vasquez sees them, he opens fire. That sets the tone for the entire episode. It’s a free-for-all. Every moving body has a target on their forehead, living or dead. There’s also Soccer Mom, fond of a shotgun loaded with less lethal bean bag shells. Her luck runs out after landing a shot to Murphy’s gut; Cassandra—still very much feral—eats her for lunch. Escorpion, played by Emilio Rivera (Sons of Anarchy), uses a rocket launcher as his weapon of choice. His scenes are few and far between, but the damage he does with that launcher are felt for most of the episode after he deafens 10k with a blast. The last bounty hunting crew to get face time are the Rednecks. They’re just dumb enough to fail right in the pursuit of The Murphy.

Throughout the episode, the main crew get their backsides handed to them. This provides odd little flashbacks for everyone. Addy remembers riding her bike down a suburban street. Citizen Z recalls falling in a park and being scooped up by his mother for comfort. Roberta’s subconscious takes a dip in a pool. Doc doesn’t flashback, he has an out-of-body experience. While floating near the ceiling, he watches Redneck #2 strangling him, then spots a letter opener on top of a bookshelf and tells himself to knock it down. Murphy’s vision is, of course, smoking a joint with a beautiful woman. 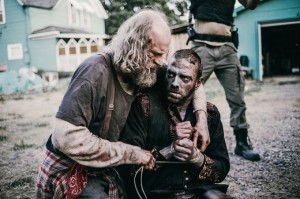 During the chaos, everyone eventually ends up in the world’s most depressing motel. This place was sad in its heyday. After the apocalypse, it became the place where happiness goes to die alone and forgotten. Redneck #1 and #2 are taken out by Vasquez and Doc in the motel. After #1 collapses, Vasquez decides to join forces with Roberta. She doesn’t say no; he just saved her life. Everyone is scattered in the building. Mack and Addy split up to avoid zombies and find Murphy. He goes down, she up. What neither could predict is the insane number of zombies drawn to the motel thanks to their prey. Caught alone in the stairwell, Mack is swarmed. The nearest door is chained shut. Addy does her best to get to him, but it’s too late. She stays with him, watching the zombies bite him, until he turns and she gives him mercy. Everyone else makes it to the roof where Murphy contemplates jumping. He and Roberta argue, but it’s mostly for show. Murphy jumps, landing in a swimming pool lined with zombies.

He doesn’t make it far. Angry, Addy tracks him down like a bloodhound. She yanks him from the van and beats him until the others drag her off of him. If Murphy hadn’t run from them, Mack would be alive. It’s a harsh truth they all realize the second Roberta asks, “Where’s Mack,” and Addy breaks down. Murphy’s fight leaves him in an instant. Even Cassandra complies when 10k motions her to climb into the van. 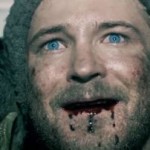 Mack’s death is only the second main character loss on the show with any serious impact. It was just assumed he’d continue to be there for Addy even though they aren’t a couple. He made the trip to the compound she called home to make sure she survived the nuclear blasts. No one told him to check on her, he just did it. Mack was the one to suggest they rejoin Roberta’s mission to deliver Murphy to California. As much as he got in the way, he also helped round out the group.

They’re not down a fighter, though. Vasquez hops in the van with everyone at the end of the episode. His plans to sell Murphy to the highest bidder must be out the window after seeing how far the living will go to collect the bounty and promised cure. A solo bounty hunter won’t make it a block with Murphy in custody and he knows it. He also knows the nuclear fallout will make driving westward impossible. They have to skirt the worst damage and hope to find a clear way to the lab. If the lab hasn’t been blown up like so much else in the US.