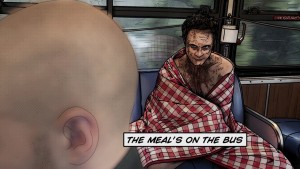 Okay, they’re at least tying everything together so it feels somewhat like one show and not two separate things where some people do police work while others flounce around being two-dimensional stereotypes. Don’t expect much from Liv. They dosed her with another hyper-paranoid woman’s brain—this time a brilliant scientist. They give Liv the brain of a woman three times smarter than her and she still ends up obsessed with the whereabouts of her boyfriend instead of focusing on something like, oh, actually staying in the lab to help Ravi figure out a cure so Major and Blaine don’t die from the serum she supplied. Then, she uses her intelligence to break into Max Rager, pry into the goings-on in their testing facilities, and is caught after Rita watches her walk into an elevator. This isn’t Metropolis. One cannot style their hair differently, don glasses, and expect anyone with half a brain cell not to recognize them. Liv has done some dumb things, but walking into Max Rager knowing full well they may have had a hand in killing her lunch—Elinor Cash, a research scientist burned alive—is the worst idea yet. She’s lucky Du Clark’s Super Max-induced insanity was in check long enough for him to let her walk out the door with nothing more than threats over her head instead of a bullet through it. 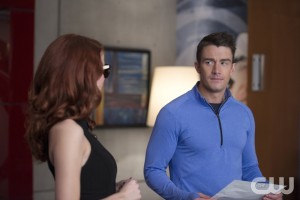 While Liv does the things Clive told her not to, he’s busy scratching his head alongside Bozzio. See, they found Blaine’s pop’s cabin. Lo and behold, more brains found in connection to the Meat Cute fiasco. This prompts a friendly argument about what kind of brains they keep finding. The report Liv doctored is exposed when the FBI lab tech says the brain Clive had tested before wasn’t bovine. Oops. Clive’s shuffling closer to the undead truth. For a detective, it sure takes him a long time to figure out things right under his nose. For instance, how did he miss the fact that the main suspect in the Cash murder, who should be horrifically scarred despite claims of plastic surgery, has an identical twin sister? The twin’s flawless appearance should’ve set off huge warning bells. Instead he took a pretty girl at her word up until he finally has to do police work in order to wrap up the episode.

Blaine isn’t having a good week. He’s killed. Revives as a zombie . . . again. Then is forced to take public transportation to the morgue in order to beg for a bite and pants to cover his dignity. Not only that, but the cures Ravi cooked up keep failing and Blaine’s sporting a cough which would make consumption envious. His time may be up. Where does that leave his zombie clients? It’s a very real fear Liv and Ravi drive home repeatedly once they realize Blaine may very well just keel over one day if they can’t find a stabilized cure. The nerdy brain Liv and Blaine eat helps Ravi to an extent and he produces something which may work. Desperate, Blaine makes final arrangements for himself, including passing control of the brain biz to Don E. and Chief should he kick the bucket, before taking the cure which may or may not work. Mortality humanized Blaine, even when in his ideal state of undead. Before, he was undead without a care about the future. Now he knows this is not the key to immortality. It’s a great bit of character development to see Blaine actually care about the void he’d leave.

Major may be doing his last dirty job for Blaine if the zombie’s Hail Mary doesn’t work. Drake is the newest name pulled from the Max Rager list which complicates Blaine’s life. The double agent may be exposed at any time. It’s a hazard Blaine can’t leave with his fate in the balance, so off Drake goes to the freezer. Major is almost caught making the grab. Liv is waiting yards away inside a cheesy pirate restaurant to confront Drake about his connection to Boss and his drug trade. It’s a talk they never get to have. Funny how when Liv makes an idiot of herself by snooping, she never gets to resolve her feelings in a healthy manner.

I’m not sure where things are heading. Clive surely will make the zombie discovery soon. Liv may even find out Major is the serial abductor. Who knows? There’s so many threads in this plot, I’m not sure they can shove resolutions for everything in before the season ends. They have four episodes to make it happen.