Warning, the following contains show spoilers and a strong opinion.

I’m a die-hard fangirl. When a show gets my attention, I hang on to the bitter end—anyone who saw my reaction to True Blood‘s final season know what happens when a show lets me down like a frayed guide rope while climbing Half Dome. At least that show started pretty strong. This show never really found its footing. Every time I thought they’d stepped up to the plate, wanted to be good horror, they failed to follow through. In the two episodes before the mid-season break, they lean toward the macabre. First with Celia’s guests in the cellar. Then they opened the mid-season finale with Ofelia’s face peeling off, only for it to be a dream. The cellar bit? We saw the same plot on TWD when they found the walkers in the Greene’s barn, put there because Hershel believed they weren’t lost causes. Celia saw it as evolution, driven by divine intervention in the form of zombies. Both think the undead are worth our love and care. No part of me was surprised to discover Celia ran a freaky suicide/mercenary side business. Nor did the religious slant surprise me. When they steered the Doomed Ship Lollipop toward Baja, I knew they’d use the culture this heavily. Why not? It gives them the perfect scapegoat to rehash the tiresome but-they’re-family plot. On Z Nation the Zeroes, based just south of the border, worship death. I guess FtWD thought they could do something similar and have it work as anything but somewhat insulting to an entire culture’s intelligence just because they’re constantly portrayed as chill with Death.

The effects gags just aren’t worth the effort to pay attention to the story-telling anymore. In the season opener, I called them out for using the boat propeller in the face gag. Since, it’s been more of the same bland infected action. Why? They set the first half of the season on a boat. Their human bad guys were as interesting as watching leg hair grow. So where does that leave us on the tension front? Bickering and nagging, occasionally silenced by an actor in zombie makeup limply shaking his arms at the lead actresses while they flail a fishing pole at it. Some shows are salvaged by the action when the story goes bad. But when nothing happens in the story or the action? What’s the point? Then it’s just people making bad decisions, living on a yacht, and yelling at each other. 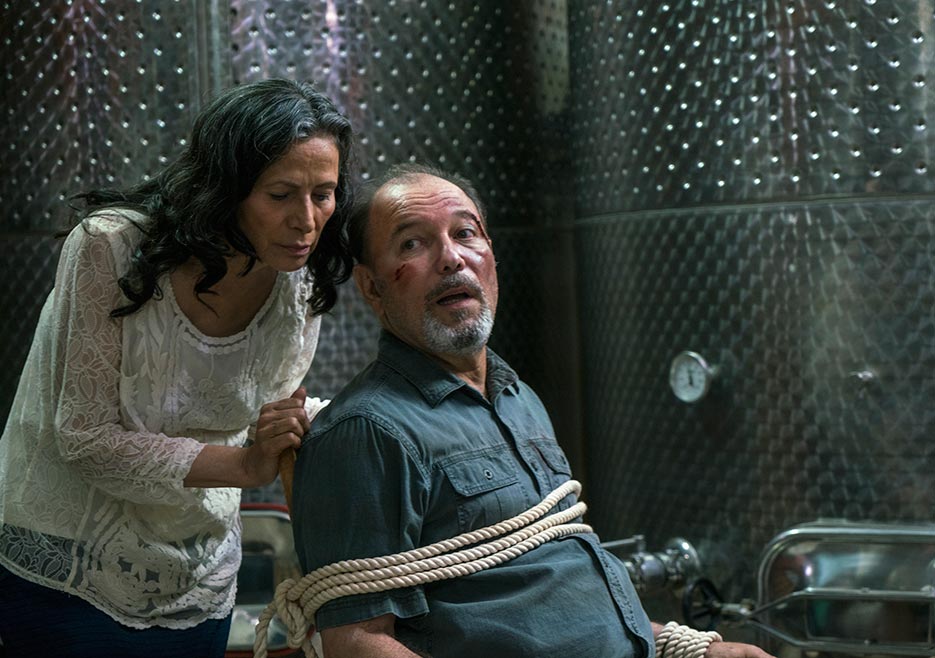 “So we’ll make one of them insane!” Nice try, guys. I’d totally buy it . . . if Chris had any actual reasons not to trust Madison and her family. At what point have they left him behind or put him second? Madison and Travis drove into a riot to save him. They made a deal with perfect strangers in order to secure safe haven until the riot passed. Nick jumped off the yacht thinking Chris wanted to swim away or drown himself. They staged a funeral so he’d have a chance to deal with his mother’s death. So why he’d snap, threaten Madison and Alicia, and run away to hold a family hostage is beyond my reasoning. Nick is a more likely choice, seeing as they laid the groundwork for it with his rampant drug use. He does some batty things, like willingly walk around covered in walker goo on numerous occasions—so much so, the original scene from TWD in “Guts” has lost its impact entirely. Now he’s fearless and buying into Celia’s bull about life eternal. Also so apparently broken, Madison—mother of the decade—asks Strand to sort her crap out while he’s digging his lover’s grave.

If I even start on how they’ve written Madison, I’ll break my keyboard. She’s by far the nosiest, indecisive, and nagging character ever to survive to season two in a show. Seeing as she’s the universal mother figure, I hate to hear what the people at the writing table say about their mothers. Somebody in that writing room needed a hug as a child.

The characters have no backgrounds. They’re all blank until they need convenient problems—Chris’ insecurity and psychosis, Daniel’s PTSD and hallucinations, Nick’s trip down sociopath lane. Alicia led the group to their first real bad guys in the season and we still know nothing about her except she’s impatient and bravery makes her do rash things. Travis has the personality of a jellyfish, only finding a backbone to salvage the weird Chris-Is-Crazypants story. Strand actually has this decent backstory, except it came too late in the game to salvage the damage done before Tom was introduced, and then swiftly killed off to avoid that whole messy gay character issue. Leaving Strand the outcast yet again, essentially a blank slate so he can resume being a prick. Instead of writing a world and characters living in it, they’re writing caricatures to manipulate how viewers see the world and what happens in it. It’s not good storytelling. There’s no consistency. Narrators, the characters driving the story, must be consistent. Someone suddenly sporting a raging case of PTSD leading him to burn a building at the behest of his dead wife just means the writers wanted to blow something up for the mid-season finale. It works for Z Nation because explosions are a part of parodying the genre. It does not work for FtWD in episode 207 when it’s painfully obvious the only reason any of this took place was to burn things on camera. Again, this entire story was lifted from TWD season two, right down to the main survivor group disbanding at the end. 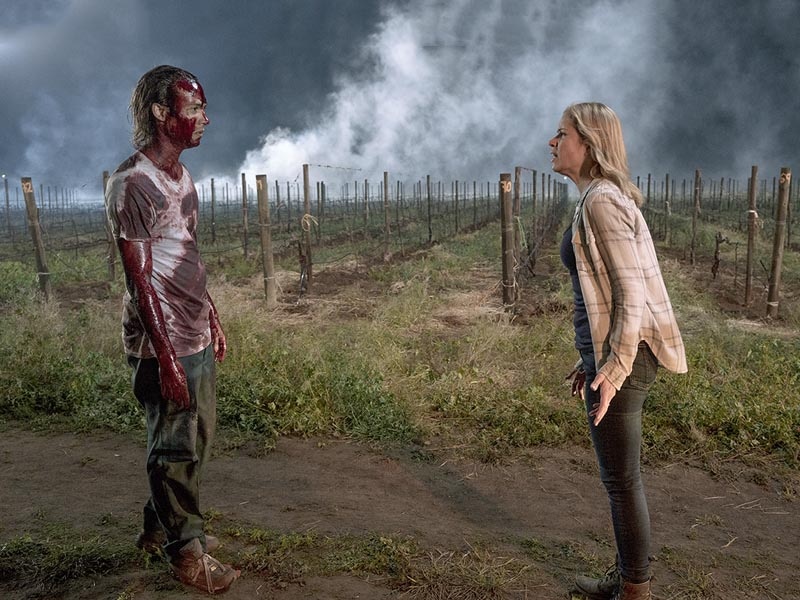 So why should I keep watching? If this show refuses to stick to their characters, follow a coherent story, or just rob content from the mothership, it really isn’t worth my time. I watched in the hopes that someone would bring another quality genre show into viewers’ living rooms since TWD is bogged down by expectations. What I got was essentially the discarded ideas from the main show, stretched beyond believability, and crammed into a glitzy, Hollywood setting. The grand settings are an attempt to mask everything the show lacks. All it did was tie their hands trying to make zombies work on water. I mean, there are ways, but it requires thinking outside the box. AMC didn’t buy outside-the-box. They wanted TWD, but with a longer name. What they can’t buy is my time.

This is the last review I’ll scribble for FtWD. There’s no salvaging the mess they’ve made. I’m jumping ship before it gets worse.