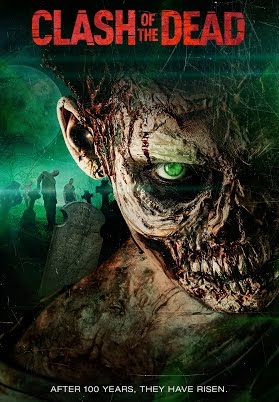 Zombie Reviews . . . Clash of the Dead
By A. Zombie

Found footage films are not my bag. Just getting that out here as a reminder. The camera movements jerk too much and my rotting brain can’t keep up with the action. Good news, the action in this movie is so slow, the POV movements don’t obscure anything of note. That’s also the bad news.

What are they trying to do in this film? Here’s a quick summary:

There’s money to be made from war documentaries even a century after peace talks ended. It’s not a lot of money, but it’s there. The trick is to make old stories shine anew, and maybe stage a few “surprises” for the hosts to stumble upon to up the ratings—it’s only fraud if one is caught doing something like, oh, making a UFO fly over a well-known wonder of the world. Aiming to cash in, Marcus takes a film crew to the Somme with the goal of digging into some of the more obscure myths. Their expert, Brian isn’t so sure that’s the right path, but he and the others get wrapped up in the moment when they stumble across a chained and submerged soldier’s body bearing a totem said to revive the dead. When darkness falls, the crew unwinds with a little soccer to recreate the fabled No Man’s Zone soccer game during an early WWI Christmas Truce. Another team joins them on the field, but these guys are only after a warm meal. The undead soldiers attack the film crew. Four make it into a tunnel system for safety. Only two make it back out with a possible plan to put the dead back in the ground—they have to bury the body they disturbed. Unfortunately, the dead are all about thwarting that plan.

As straight forward as this seems, it’s a mess. Due to half the cast being behind the camera, it takes most of the film to figure out who’s who, and only then it’s thanks to process of elimination as they keel over. What could be quick action beats to drive tension up is wasted on characters squabbling over past events in a failed attempt to ground the characters in what’s to be an unreasonable situation. Why waste time to ground these characters in the first place? They’re stereotypes, of course, so the dialog has to make them stand out some way or we’ve got nothing invested in these people as their doom shuffles out of Delville Wood. Spoiler: It doesn’t work. This is like watching an army of NPC die in a game. 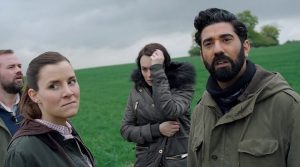 But it’s a game with decent graphics. The camera work is actually quite beautiful during the earlier parts. All those establishing shots in the woods make for some of the best cinematography I’ve personally witnessed in a found footage horror film. That all ends once the undead enter the picture. Slowly the cameras, our narrators essentially, fail. It takes the notion of unreliable narrator to another level, forcing us to wonder if the first contact moments are real. On the downside, the animation used to establish the camera failures are cheesy, obscure the fights almost completely, and there’s one sequence which may actually be so choppy with the lighting it can harm viewers with epilepsy. We miss the jump scares nine times out of ten due to the cameras jerking around. When they stay still, though, it completely kills the magic.

Why does the magic die? The zombies. They’re awful. Shoddy makeup makes them impossible to take seriously as a threat. Costuming for the old dead is okay, and likely where the focus went during pre-production for costumes/makeup. When one of the film crew is finally shown as a zombie, it’s downright laughable. Guy looks like he smashed his face in a makeup pallet called “DIY Zombie” and the primary color in it is “Old Bruise Yellow.” What could be a great kick-to-the-gut moment dissolves into chortling and hanging onto the couch for support.

Sometimes we see filmmakers trying to do the thing, only they fall short. With a little more money and time, they may have produced something worth a second viewing. As it stands, I’m giving Clash of the Dead two and a half soggy skeletons out of five.