The Chicago Comicon was a bit more than your commander-in-chief expected. Sure we in Zombie Survival Crew command pre-planned for massive crowds, sore feet, lost voices, and puffy bags under our eyes. We even had a strategic operation parameters in place for the zombies we knew would attend.

What I wasn’t prepared for was a battle to the near death with two of my co-Commanders, Blue Brigade leader Norman Reedus and Light Blue Brigade head Anthony Guajardo.

It all started early Saturday morning when I and Yellow Brigade commander Jinxie G noticed a significantly more obvious presence of walkers at the event than we had seen on Friday. We were bombarded at the temporary ZSC command post by groups of people eager to discover any survival tips they could use immediately. Quite a few people said they were ready to fight; a few even had weapons with them.

I calmly explained there was unlikely to be any actual battle inside the convention hall and most people seemed to accept that a bunch of walkers at a Con wasn’t too much of an immediate risk.

That all worked fine until the Zombie Crawl began. Pandemonium erupted as dozens of zombies converged near ZSC command. Their moans were so severe they almost drowned out the screams of everyone else. I tried in vain to explain to panicky humans that the zombies were under careful watch of the convention organizers. I rushed into the crowd of zombies to try and calm everyone down – and that’s when it happened. 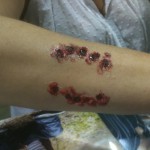 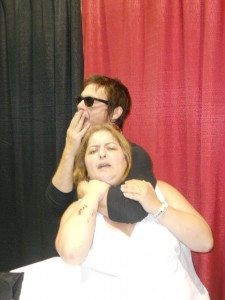 Within seconds I found myself under assault from fellow Zombie Survival Crew commanders. Blue Brigade commander Norman Reedus grabbed me in a chokehold – taking care to cover his mouth and not breathe in any germs I might be spreading or inadvertently get hit on the mouth by flying blood specks.

I croaked that the bite had been from a panicked human and NOT a zombie. Norman let me go but stayed right behind me. For a moment I found the thought of his continuing concern to be really sweet, until I spotted Light Blue Brigade commander Anthony Guajardo coming at me with a katana!

I turned to yell at Norman but he was gone. I learned later he had sprinted off to make sure other ZSC commanders were out of harm’s way. 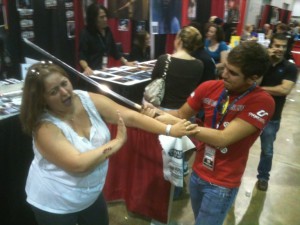 Anthony was already swinging by the time I turned back around. As the blade approached my neck I shouted “I’m not infected!!!” It was just enough to get Anthony to pull the blade to a stop, though he did not actually let his guard down until about three hours later. Instead he followed me around with the darned katana. And believe me, the guys over at Dragonsong Forge who made that beautiful piece of weaponry are going to hear it from me personally very soon.

After I calmed down enough not to want to seriously hurt my fellow commanders, I decided this little experience holds some valuable lessons: