Review of The Walking Dead 301 “Seed” 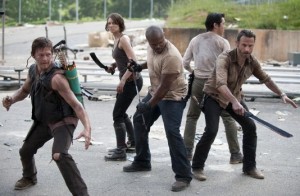 October is finally here. For some of you, you won’t understand the huge breath of relief some of us took on Sunday night when we curled up on the couch and tuned into AMC at nine o’clock. Okay, relief may not quite be the right word, given the amount of bloodshed in the season premiere of The Walking Dead, but you get the gist. No more counting down days. No more stalking websites for behind-the-scenes interviews and pictures. The time has come to catch up with Rick, Daryl, T-Dog, Andrea, and the other survivors on the show.

Season three picks up a few months after where season two left off. The opening sequence, with its lack of dialog, spoke volumes about what has happened in their lives since Rick put his boot down and declared the beginning of the Ricktatorship. There was also an amazing pullback shot to unveil the first walker of the season. For all of those who complained there weren’t enough zombies in the last season, your wishes have been granted. There was no way to keep a body count in this episode, not even on the re-watch.

One huge difference in the group dynamic, everyone carries their own weight. Even Carl is given the task of standing guard while the others discuss where to go next on their never-ending quest to find enough supplies to keep them fed and safe. Not only does Carl stand guard, he’s handling a gun and hasn’t managed to shoot his foot or someone who is actually alive. Amazing, considering months earlier he couldn’t hit the broad side of a barn and the group was nearly torn apart over the fact that he’d been given a gun at all outside of target practice. Yeah, a lot of folks will think, “Sure, put the kid in charge of dangerous things” and laugh. But, hey, at least they’re at a prison. Hopefully the place is big enough; he’ll stay inside like he’s told.

The other huge change in the group, they’re moving and thinking like a paramilitary unit now. Months of constant moving have ground down the rough edges from personalities clashing and created a fluid hive mind, lead by Rick. Daryl stands at Rick’s right hand. Glenn and T-Dog are on the left. And Maggie is seriously holding her own with the men during fight scenes. No one is superfluous…without reason. Quit yelling. We all know there’s one character fans love to hate. We’ll get to her later.

What I’m talking about is the efficiency in how the group moves into the prison. It is almost too easy. Rick got them all worked up, spoon fed them pretty stories to rile them up and get them to keep putting one exhausted foot in front of the other. He turned the prison into an oasis—a goal too good to be true in the eyes of tired and starving travelers. Will they find their oasis in the prison or is the proverbial desert stretching out in front of them with no water in sight?

Since leaving the farm, the group has technically been split. Andrea didn’t make it out in the mad dash to the cars and was left behind to fight her way through the woods. When the end seemed to be coming for her, someone stepped out of the shadows and saved her—Michonne. Michonne is ruthless in the way she kills. She doesn’t waste energy in movement. She does what is needed to ensure she isn’t bit and moves on. There is probably a lot of severed zombie heads left in her wake. Michonne also seriously cares for Andrea. They’ve bonded over the months they’ve been on their own path of survival. Well, Michonne, Andrea, and the pet zombies. There’s a band name for someone to use.

Okay, fine, we’ll discuss the Lori Problem. This is similar to the Shane Problem, but with more hair, an incoming baby, and a lot more crying. Long gone are the days when Lori could bat her eyelashes at Rick and convince him to do her bidding. He’s done buying her snake oil treatments for a better life in the Zombiepocalypse. Rick tried things her way and lost his best friend in the process. But he isn’t dwelling on it. Rick is pushing the group forward. Lori just wants to dig up the pain they left rotting in a field on the farm. Her baby is due any day and it is very apparent that Lori is not mentally prepared for it at all. She is still focused on herself and how others perceive her. Can she change her focus once the baby comes or will she spend all of her time worried over whether or not the kid looks like her husband?

The final scene of the Walking Dead premiere left a lot hanging in the balance, more than I’m comfortable with, actually. Any time this show leaves a cliffhanger, fans end up rather upset or disturbed. Despite the potential for fan-angst, what is to come in the season—the Governor, the prison and everything else—promises to be amazing.

What are you looking forward to during the third season of The Walking Dead? Let us know in the comments below.