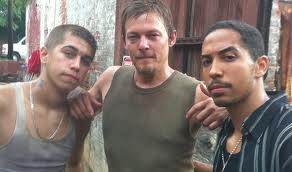 Rest assured, your commanders have heard the cries of anguish from our crew and we are in full agreement; the Vatos need to return to The Walking Dead.

Our undercover agents have located targets for a campaign launch in order to make sure they are aware of the overwhelming love the Zombie Survival Crew has for the Vatos.

We will begin sending #BringBackTheVatos tweets to the targets at 12:00 PM on Friday February 11th. The retreat will be called at 12:00 PM the following day, Saturday February 12th. Times are local to whatever time zone you live in.

Now I know we all feel strongly that our Vatos deserve more screen time, but please keep this civil. -R.C. twirls a sword and gives a stern look-

Get the point? Good. Now go forth and tell the world at large to #BringBackTheVatos!