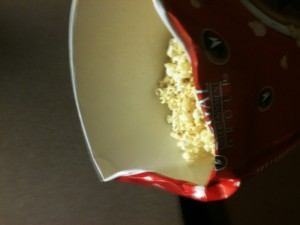 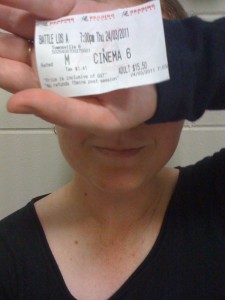 What would happen if an alien force invaded Earth? If Battle: Los Angeles is even 75% correct, put me out of my misery before they get further than the beach.

As far as film openings go, typically war footage gets some yawns and expectant foot tapping. However, given the conflicts and recent disasters the audience was rapt. Silent. Dare I even say, thoughtful? This film comes about at a very strange time in the world’s history and hands us a look at war on the home front.

Right away, we’re driven to like the platoon of marines. They are funny, and I’m not saying this because ZSC’s own Neil Brown Jr. delivered some of the most amusing lines. The cast they put together for the film is astounding. Their performances make Battle: Los Angeles work. Without an emotional connection to the characters it’s just another alien shoot-em-up movie.

The most difficult parts of the film aren’t scenes where they show civilian casualties, though they are striking. No, what caught me was moments where, alongside the marines, we see the full scope of the damage to the city unfold. It became a macabre beauty of sorts painted in fire and smoke. Landscapes most city dwellers take for granted are leveled in no time at all.

During combat scenes the audience is put in the middle of the action. They’re “grab you by the gonads” intense, but a little confusing. The pacing of the movie hits hard then backs off to allow us to regroup and figure out what the heck just happened. It literally became an edge of your seat watch for us.

Battle: Los Angeles works hard to show how combat can mess with a person’s head. There are moments when we forgot the aliens outside because the marines dive so deep into their own issues. Only once did I feel the attention to their mental plight took from the movie itself. However, with the way the film is shot the audience gets a really good grasp of what happens to people during war. It’s not all physical damage out on the battlefield.

Holy S#!% moments that ZSC members should look out for in order to learn new battle techniques? How to quickly discover the enemy’s weakness. A unique way to dispatch a rather large enemy combatant. (A technique this commander will utilize should I ever be surrounded by zombies) Oh and what happens when a tough as nails female is injured.

Go out and see this film. It is a heck of a ride.

Don’t forget, our Battle: Los Angeles photo contest runs until 11:59 PM PST on 3-25-2011. All you have to do is snap a picture of yourself with your Battle: Los Angeles ticket stub at the movie theater and email it to command [at] zombiesurvivalcrew [dot] com (please see contest blog for complete rules and regulations).

First ten entries will receive an official ZSC bumper sticker. All entries will be put into a drawing for a secret prize from Neil Brown Jr.