Time to Visit the Z-poc Once More
by R.C. Murphy 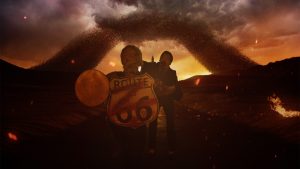 Well, Syfy did it again. They withheld information about the starting date for Z Nation until a month before the premiere. Which is a tad annoying, given how supportive the fanbase has been since day one. You’d think they would be eager to share the good news with us, like in the past when the schedule was usually sorted around July. However, over the last few years, there’s been less and less press for the show from any official sources which aren’t the producers’ Twitter pages or behind-the-scenes selfies from the cast. Matter of fact, so few outlets have snagged this news, the only way to verify beyond social media that Z Nation does indeed return on October 5th was to find the little note on the show’s website banner.

The same frustration about the late announcement for the premiere date stretches over to the fact that there’s still no full trailer online, despite there being one floating around in the ether that was shown at SDCC in July. The best we have since then is a teaser attached to the announcement for the season five premiere. It is only available on Twitter from an official source, so that’s the link you get. At least it’s something to get us ready for next month, right? 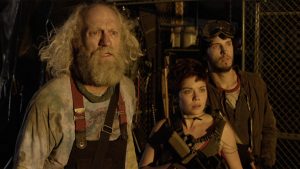 In the teaser we’re given a glimpse at the latest generation of zombie, Talkers. There’s also a good look at a couple new characters. For most of the teaser, Katy O’Brian, as George St. Clair, gives Operation Bitemark the lowdown on the Talkers. In other clips, a man in a black hat and Warren face off with a zombie, and Murphy and 10k have their first encounter with a Talker. Bet Murphy’s surprised he’s not the only supernatural creature capable of holding a conversation anymore.

We’ll be back with news about Roberta and the gang soon. A. Zombie will bring you reviews for Z Nation after season five begins on October 5th at 9 PM.